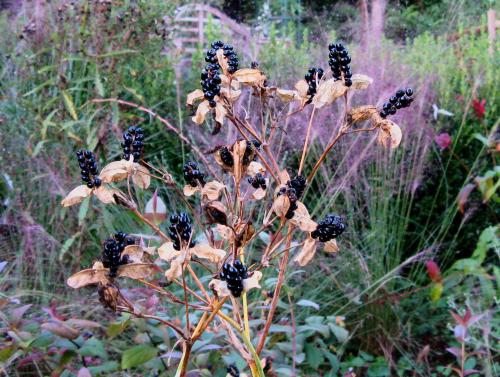 My friend and fellow blogger Mr. McGregor’s Daughter, or MMD as she is referred to for the sake of brevity, has started a meme about berries in the garden. It just so happens that we have been hoarding photos for a post about berries to be written during the slow months of winter when there is not much colorful going on in the garden. There are a couple of other files for posts during that dreary gray time also being compiled. Do you save photos and topics for the slower times too? Anyway, rather than raid that cache the camera was grabbed and the resulting shots are presented here as the berries of the September 2008 garden. Shown above are the blackberry lilies, Belamcanda chinensis, heavy with seeds. All those beautiful seeds are ready to be sown now, that is why we have so many of this plant. We have so many that instead of planting every seed we can leave them on the straw colored stalks for fall and winter interest. The lovely pink haze in the background is the Muhlenbergia capillaris, the topic of another post coming up soon. 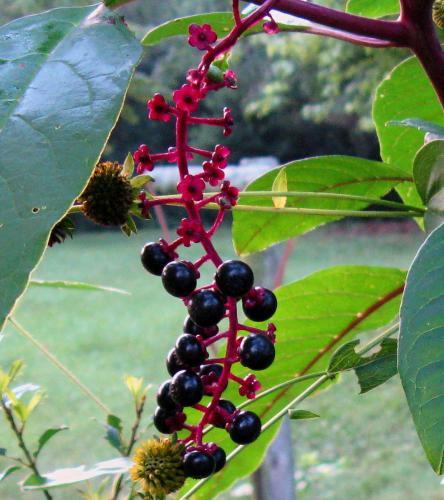 We are awash in these berries from the native pokeberry plant, Phytolacca americana. We don’t have to save these seeds and plant them for they are planted by the birds after their digestive tracts have made use of the pulpy fruits, everywhere in every bed. Some are left to grow and produce along the property edges. The hot pink stems are striking wtih the black berries, don’t you agree? 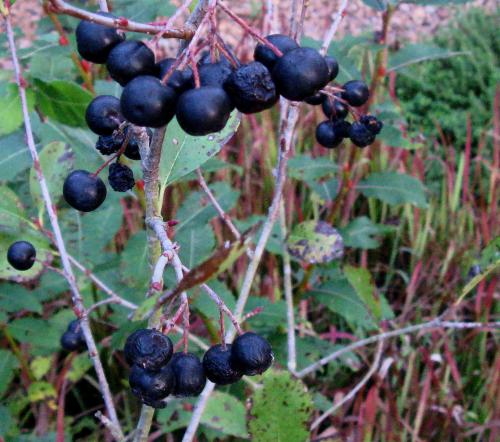 Aronia melanocarpa ‘Viking’ is finally growing to a size to have more than one or two berries. Ordered from Heronswood while it was still owned by Daniel Hinkley, (don’t get me started on that subject) it arrived off the truck as a very small specimen. Of course it was moved a couple of times, then accidently pruned, read stepped on, by a clumsy gardener. Sigh. The flowers are white tufts in the spring and the berries of Viking are black and large but the main feature of this shrub is the colorful fall foliage, brilliant red. The leaves are just beginning to change and it is hoped that the berries will remain for contrast. The birds are not interested in the berries, and humans should not try them for the common name of this plant is chokeberry. (Added: wikipedia says the berries can be used for jams, but I am not giving them a try!) 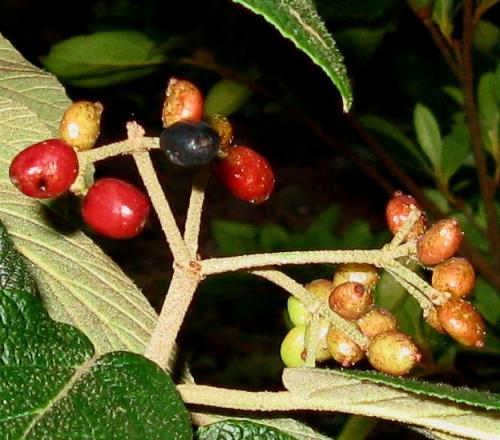 We have been on a mission to add more berries for winter interest and wildlife feeding for a few years now. In addition to the Viburnum x rhytidophylloides ‘Alleghany’ of which there are two large and two smaller seedlings from the two large are V. ‘Brandywine’, ‘Blue Muffin’, ‘Winterthur’, opulus ‘Xanthocarpum’, ‘Cardinal Candy’, three of those, and an unknown spring bloomer whose berries are quickly eaten by the birds. Some day when these mail ordered bushes are blooming size, there should be a wealth of berries for this meme! 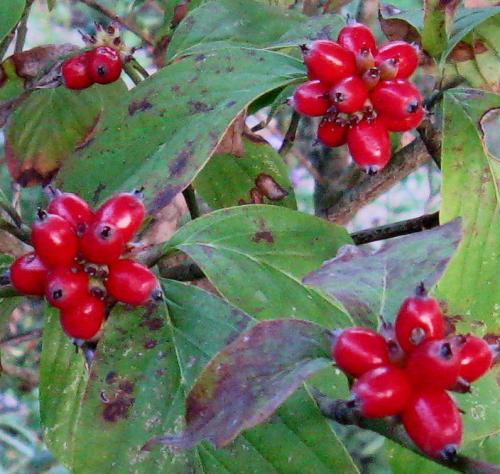 This was a banner year for the dogwoods. Click here to read about the bounty of blooms produced by the pink dogwoods planted on the slope behind the main house. The flowers have given way to a bounty of berries. We are already pulling dogwood seedlings from paths and beds. After this crop falls to the ground and germinates we will have very tired fingers from pulling them. Wonderful as these trees are, there is such a thing as too many. 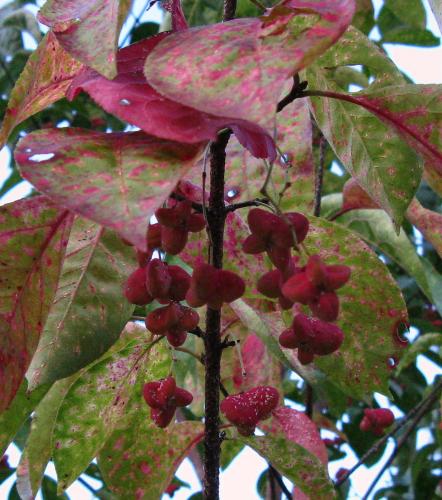 Given by generous neighbors Mae and Mickey, he even planted it for me!, is what was believed to be Euonymus americana, Hearts-A-Bustin’. After seeing a bush by the same name at friend and fellow Tennessee blogger Gail’s garden of Clay and Limestone that looked very different and also some studying online, we can now say that we have no idea what this bush/tree is. Does anyone recognize it? The hearts will open to reveal red berries with the husks a light tan, a very fetching combo. 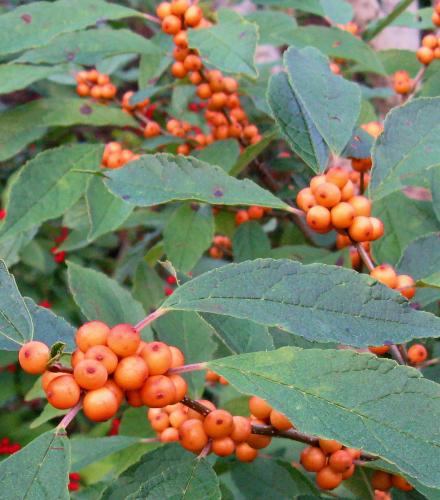 Now we get to the meat of this post, up to now was the appetizer, soup and salad. A close up photo of this berry was used as a header a few posts back and was understandably mistaken for persimmons by Our Friend Ben of Poor Richard’s Almanac . Do you know what this bush/tree is? It is a native winterberry holly, Ilex verticillata ‘Winter Gold’. 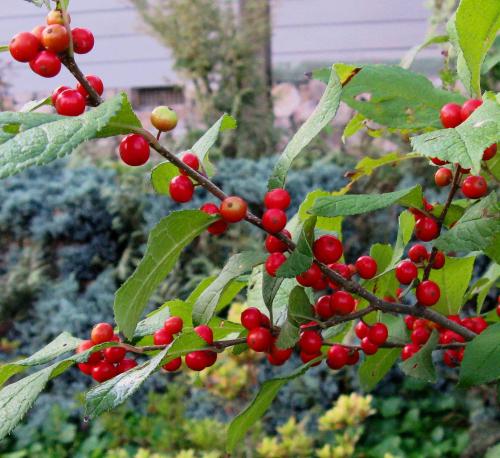 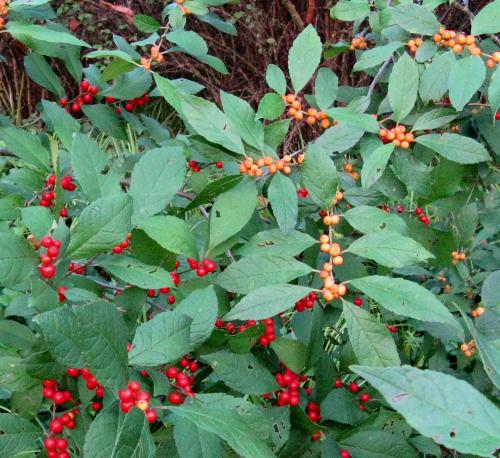 There are two bushes of each of these varieties and two more of the male pollinators that are necessary for berry production, I. verticillata ‘Apollo’. We added two more red fruited shrubs to the grouping, I. ‘Berry Heavy’ that are still small and have been moved closer to  the males for better berries. With a name like berry heavy we are expecting lots of fruits. 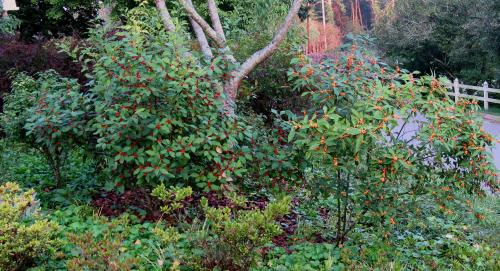 All of these hollies are planted under the Yoshino cherry tree in the front of the house. The cherry has already dropped its leaves and the hollies are laden for a delightful winter show. Their leaves will color then fall to the ground to leave stems and colorful berries.  The birds leave the berries alone until they, the berries that is, soften in March. That is when we know that spring is just around the corner, when the cardinals sit and munch all day on the bright berries. Spring!!!! Well, it’s best to think ahead when you are a gardener, isn’t it?
Frances

This entry was posted in memes. Bookmark the permalink.

27 Responses to Berries For MMD