There was some luck that came our way the other day as we were out and about in the garden once again with camera at the ready. A steady stream of attempts have been made to get that money shot of the pink muhly grass, Muhlenbergia capillaris, as it hits its crescendo of bloom soon. While the view from anywhere in the garden or in front in the driveway, or the best of all, the view out my kitchen window over the sink is beyond the pale, trying to capture that magic with the camera is proving beyond the difficult. Shown above, the Knockout rose is the perfect enhancement for the grass  with its dark foliage and single dark pinky red blossoms that some people find a difficult color to use. Might it be suggested to use it with the muhly grass and place it so the sun’s rays can illuminate  from behind?

There was luck with the very late opening of the oriental lily ‘Stargazer’. Several packages of these lily bulbs were purchased on sale late spring at the biggest big box store, you know the one I mean, for a buck! They were scattered around, not at all following Piet’s formula of design of dense groupings of one type plant. In our defense, it was before we had joined the Piet cult that the planting took place. They had all finished blooming by the end of August, except this one. Hidden among some Salvia greggiis on the slope was this single specimen, only a foot and a half tall, but with the full sized flower wide open. Click. Next year the bloom time will probably be earlier in the summer, with the rest of the Stargazers. Remind me to throw some bone meal around their little footsies.

Lucky too is the reddening of the Coreopsis ‘Redshift’. This plant was purchased while we were in Pennsylvania for a wedding and the outstanding feature of it was the dark red streaking of the flowers. As soon as it came to live in Tennessee the color of the blooms turned to solid yellow with a narrow red band in the center. Pretty but not what we thought we were getting. As it turns out, the cooler temperatures trigger the redness to return. That’s more like it. 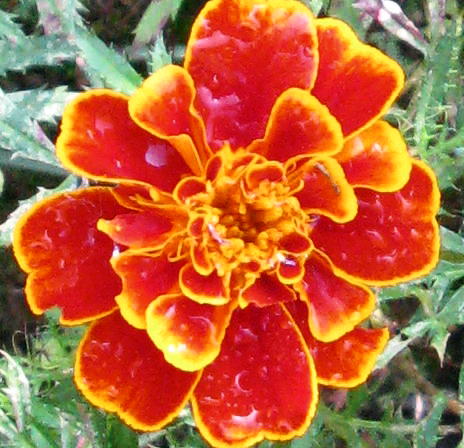 A spot of luck happened with this self sown marigold love child of Queen Sophia, Tagetes patula ‘Queen Sophia’. It has been many years since the first packet of her majesty was carelessly tossed out into the Faire Garden. Other marigolds were purchased and a bit of dilution has occured in the offspring. We adore the color orange in all things and this lone princess makes our heart glad. 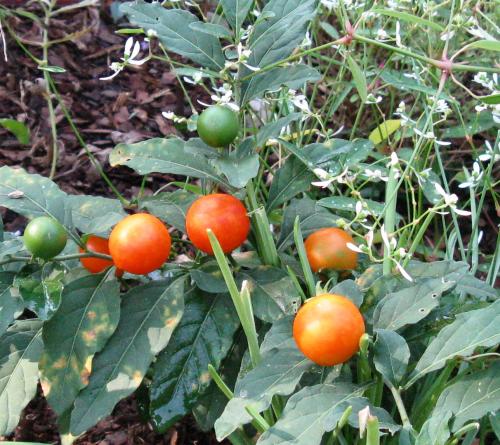 We are never sure if our perennial pepper, (the link to this post has been imbedded so many times that it will henceforth be provided upon request only), is going to return after late killing frosts ring the bell of death for much hardier plants, but not only does every plant return, the seedlings of the orange ball peppers return as well, no matter how small they are when winter descends upon us. Just lucky or is this the miracle pepper? Why has this not been advertised by the big growers? Is this the only place where it grows? Here and down the street at our neighbor Mae and Mickey’s, our private source. 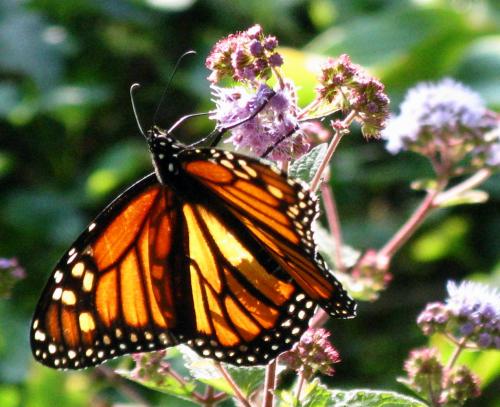 By the time you have read this  and seen the photo above, one of the drawbacks of having the caption under rather that above the pictures, you will have guessed why we consider Lady Luck to be with us this day. 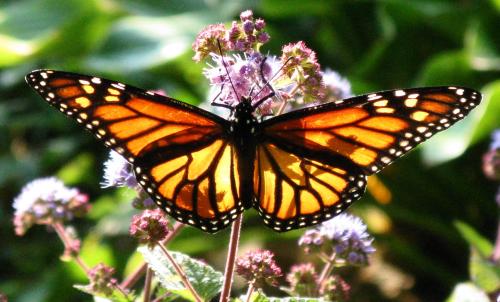 We were stomping around on the hellebores under the pink dogwood trees on the slope trying to get a good shot of the pink muhly grass, squatting and bending, with eyes only searching for the light streaming through the feathery inflorescenses when something flitted across our field of vision. We started snapping as the butterfly enjoyed the nectar from the wild ageratum, the name of which has changed so many times that the common name will suit our purposes here.  The light was at such an angle in the sky to shine through the papery wings. The shadow of the flower heads is apparent as though the orange wings were a shoji screen.

We have seen only one other Monarch butterfly in the garden this year although we are rich in black swallowtails among others.  It was cause for revelry and joy and was written about here . This time not only did we get several shots clicked, on zoom, but accidently took a photograph of the muhly grass while still on zoom as well. The result being the first picture featured on this post. An epiphany! Treat the muhly like a butterfly and use the zoom. While many of you out there may have already known to do this, I obviously did not, so please share in a novice photographer’s glee at this discovery.

The light is our friend while wielding the camera at the correct times of its ascent and descent. Paying enough attention to know just when to go out seems like an easy enough assignment. But we have found that the main ingredient for getting the shot that brings a smile is luck.
Frances

This entry was posted in Musings. Bookmark the permalink.