Posted on October 8, 2008 by fairegarden 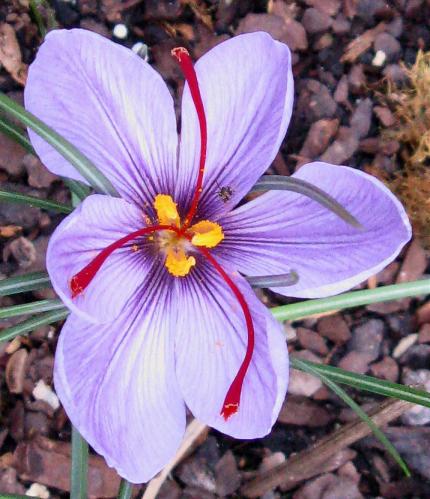 Last year a dozen Crocus sativus, the saffron crocus, were ordered from High Country Gardens and promptly planted when they arrived on September 21. (Are you impressed with that little bit of journal keeping?  Since the blogging began last December the journal entries have been sadly lacking.)  The only thing that came up were leaves, strappy grasslike affairs. The flowering must have been missed. What a disappointment. But because we know that gardening is about patience, the reward for waiting came this year. Above is a photo of the first bloom. 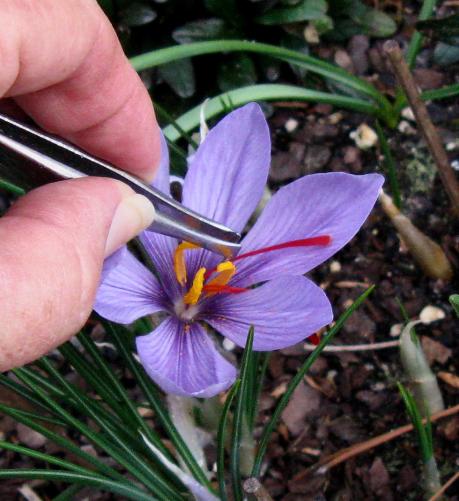 Research told us to harvest the saffron threads, which are the three red stigmas produced by each flower, when the dew has dried and the flower is still fully open. It said to use tweezers. This is a delicate operation, especially when holding a camera in one hand. My friend Laurie told me that she had read about the padding of saffron packets with the yellow bits. I can see how this could happen in a large scale operation for my harvest also snagged some yellow bits, they were quickly discarded so as not to taint the product.

Here you can see the upper left flower with the saffron removed, two more to go.

The entire patch is shown in this shot. Three out of twelve flowers opened the first day. The rest opened yesterday. They are growing in the raised bed by the front walk where I will notice it. There are little bamboo skewers that are placed around the perimeter of the planting to show where the bulbs are after the foliage goes dormant during the summer and to deter the devil squirrels from digging there. The leaves are showing now and will persist through the winter. The bloom period is extremely short. There is no time to waste if you want to have some of this delicacy for cooking.

Most of the remaining buds have opened. Saffron has been used as a seasoning, dye, fragrance and medicine for thousands of years by many cultures. It takes fourteen thousand stigmas to make one ounce of saffron. Commercial harvest is very labor intensive, I can vouch for that, making this one of the costliest crops in the world. But a small amount is all that is needed for home use.

The harvester has been here as you can see, for the red stigmas are all missing from these blooms. The blossoms are still attractive and add to the fall color of the landscape.

Here is the haul. Three stigmas per flower times twelve flowers will give me thirty six threads to work with. It is hoped that the numbers will increase over the years with digging and dividing the bulbs after the foliage withers in the summer. The stigmas will be dried in a dark warm place, the shed sounds like a good candidate for that. It is plenty warm in there and a cardboard box will provide the darkness. After the drying we will try a nice rice dish and add a few threads to the water. Fresh saffron is something that has never graced my palate, anticipation whets our appetite.

Feeling a little left out are these crocus that also bloom in the fall, Crocus speciosus. We planted our first batch of these three years ago and were amazed at how quickly they came up and bloomed, about five weeks from an early August planting. The white tipped bud emerges from the ground containing light lavender petals. Unlike the C. sativus, whose leaves show at the same time as the flowers, the leaves of C. speciosus  pop out later, as the flowers fade.The stigmas of these are eye catching but do not have the cache of the C. sativus. Always the bridesmaid, right specie?
Frances
~~~
Our title is from the song “Mellow Yellow” by Donovan.

(Update 2010: We did use the saffron threads, all in one rice and chicken dish with onions and peppers. It was delicious. In 2009 there were no flowers, only leaves. This year they are sticking up out of the ground, right on schedule and look to have flowers inside. I will report back later if that is the case.)

This entry was posted in Plant Portrait. Bookmark the permalink.

42 Responses to Mad About Saffron