About Those Azaleas-My Signature Plants

Posted on January 7, 2009 by fairegarden 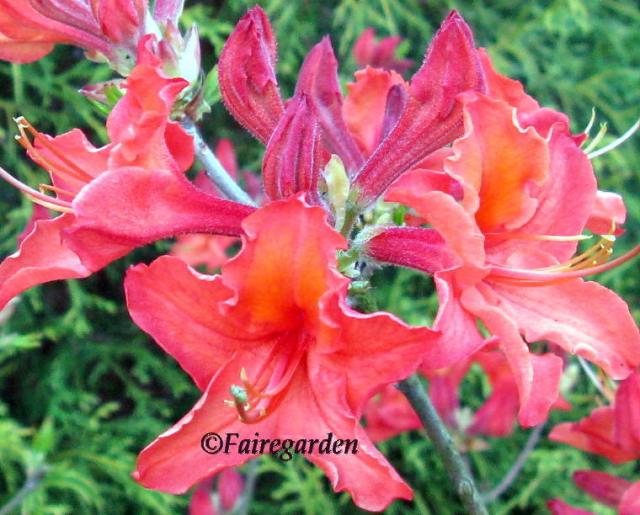 Tina of In The Garden wrote a post about signature plants and asked what the blogdom inhabitants considered theirs to be. She assumed mine was the Muhlenbergia capillaris, but that is not my favorite even though it is a beauty. I wrote in a comment to her post that my signature plants are the deciduous azaleas.~Above is Mandarin Lights, I think. 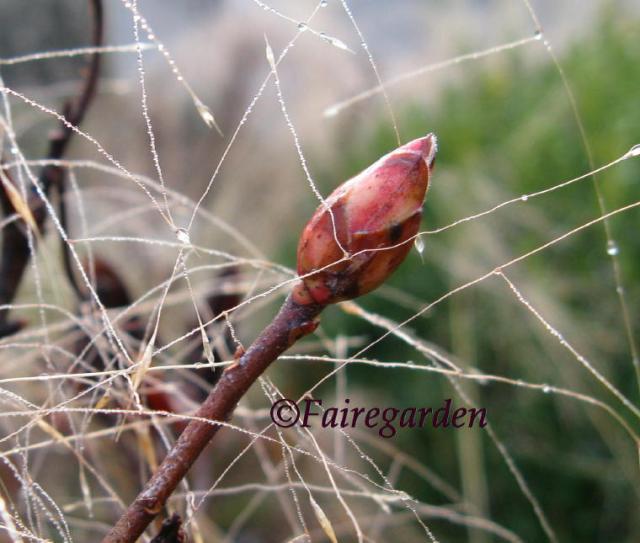 There has been an effort made recently, sort of a new year’s resolution, to list the plants growing in the Fairegarden. A monumental task and possibly impossible, but we are beginning with these leaf dropping azaleas. At last count, and even that took several tries to verify and list, there are 34 of these shrubs growing, 26 different varieties.~Above is a bud from the yellow flowered no ID growing on the slope surrounded by some muhly grass stray hairs, maybe they are fighting over who gets to be the signature.

Most of ours are crosses between the native species and the hybrids. There are 15 East coast US natives. More information about them can be found here.~ Above, Crimson Tide, one of the latest to bloom here.

These Azaleas are in the genus Rhododendron, with evergreen azaleas in the subgenus Tsutsusi and deciduous azaleas in the subgenus Pentanthera. The research done on the internet gives some contradictory information so I will give a very brief overview of the specifics as they are grown here. They enjoy full sun or part shade, acidic soil, good drainage, grow to five feet tall and taller, established plants need no fertilizer, they don’t like to be moved, ideal temperature range zone 6 to 8, but can grow in colder and warmer climates. The *lights* series for northern gardens is described below.~Above is a big fat flower bud in January showing the promise of blooms to come in April and May. 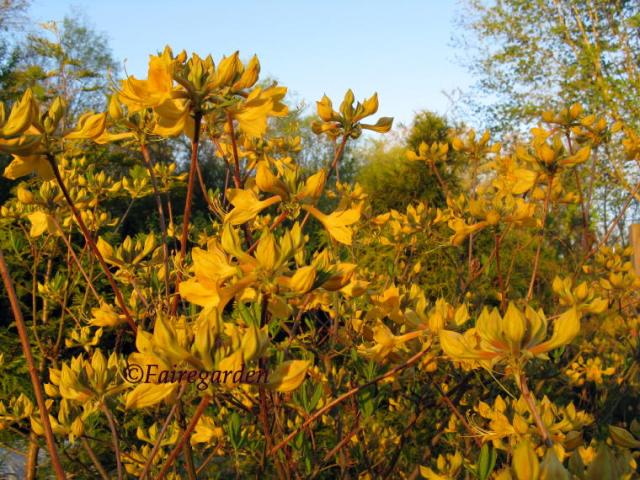 There has been much breeding done with crosses between the natives and the Knap Hill hybrid azaleas which were developed by Anthony Waterer at the Knap Hill Nursery in England near the turn of the century. The Exbury azaleas, derived from the Knap Hills, were developed by Lionel de Rothschild at the Exbury Estate in England. Both of these beautiful azalea hybrid groups as well as their descendants are now generally referred to as Knap Hill or Exbury hybrids in honor of the original hybridizing programs.~Above is the astounding Admiral Semmes, the result of a hybrid cross between a large-flowered Exbury azalea called “Hotspur Yellow” and the native Florida azalea, Rhododendron austrinum.It was introduced by Dodd and Dodd Nurseries in Semmes, Ala., and named after Confederate Admiral Raphael Semmes, whose
record of 87 ships sunk or captured remains unbroken today. 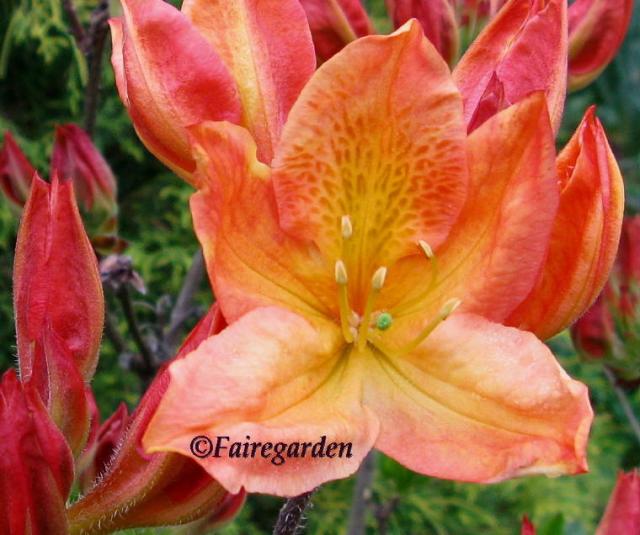 The plants growing here have come from various sources. We brought the first two from a nursery in Kingsport, TN where we were living at the time. The two yellow flowered ones that flank the steep steps going up to the knot garden were planted at the back corners of the main house when it was first purchased in 1996 for the offspring Semi and Chickenpoet to live in while attending the nearby college on soccer scholarships. Chickenpoet immediately, against my wishes got a puppy from the pound who set about chewing the azaleas to the ground. I was not happy. When we moved here in 2000 and began the renovation, we moved all the plants growing behind the house where the addition would be built with excavation by a back hoe. Amidst the tall weeds were the two azaleas, with spent blooms still showing. Talk about your miracles! The bushes were moved to their place of prominence and have grown and prospered there ever since. You can see them in the last photo of this post.~Above is Arneson Gem. I think. I am guessing on some of these, if not all, for many are similar and without seeing the location of the bush, it is difficult to be certain. 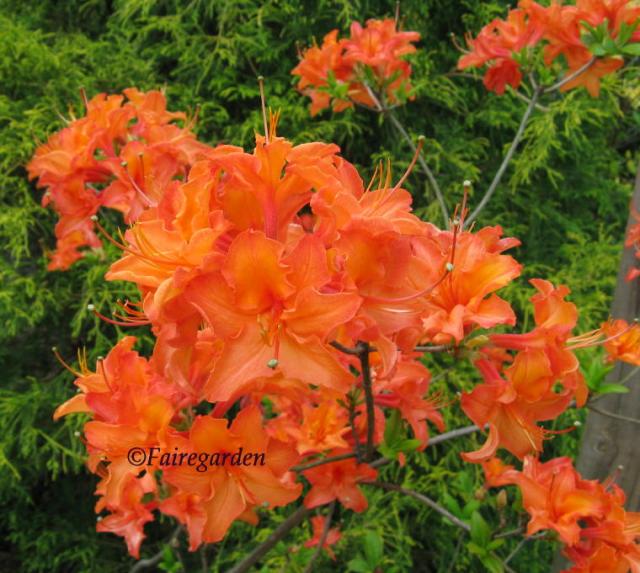 Local plant sales by garden societies have given us some of the native species. Big box stores are a cheaper source and they usually offer budded specimens in late winter. The best survival rate is to plant before the heat and drought of summer comes, although we have successfully planted some as late as mid May and even late June, but it is not recommended.~Above is Mandarin Lights. This is one of the Northern Lights Series of hybrid azaleas. This is a series of hybrid azaleas being developed and released by the University of Minnesota Landscape Arboretum. Any azalea released and included in this series will have flower bud hardiness of -30 degrees to -45 degrees F to withstand Minnesota winters. As the azalea breeding program continues, new selections will become available and will be denoted by a cultivar name that includes “lights”.

One of the joys of the winter garden is being able to see the large buds on the bare stems. ~

As the buds swell and the colors become apparent, excitement grows.~Above is Primrose. 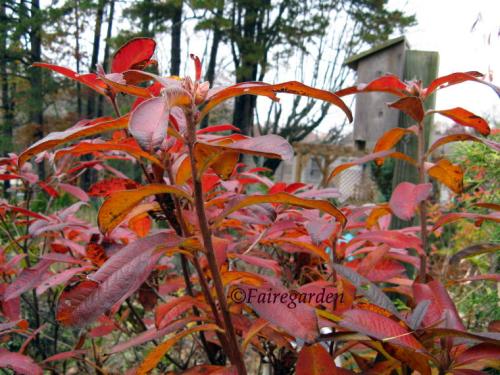 While the blooms are legendary, the fall foliage color is another asset.~Above is again Primrose, this time in November. 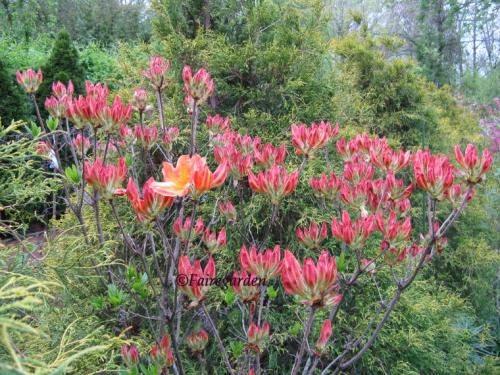 Sometimes the bud color is different than the flower. Even in bud, the display is jaw dropping.~Above is Arneson Gem.

Admiral Semmes in November gives a better view of the fall display.~

Not sure what this one is.~

The latest bloomer here, bought last year at the Bloom Day festival in late June at the University of Tennessee trial gardens is the native R. prunifolium. Rhododendron prunifolium, the Plum Leaf Azalea, is one of the latest native azaleas to bloom. The orange to vivid red flowers open in late summer and measure 1.5 to nearly 2 inches across. Flower buds for the next season are usually formed before the current season’s blossoms open.
First collected by R.M. Harper in 1913, R. prunifolium has a very small natural distribution in southwestern Georgia and eastern Alabama.
~

In January, when we are feeling a little down due to the lack of blossoms in the garden, we take cheer in seeing so many buds holding the promise of the future. The background hedge of Chamaecyparis pisifera  ‘Gold Mops’, or any taller evergreen, is the perfect curtain for the fireworks display to come.~ 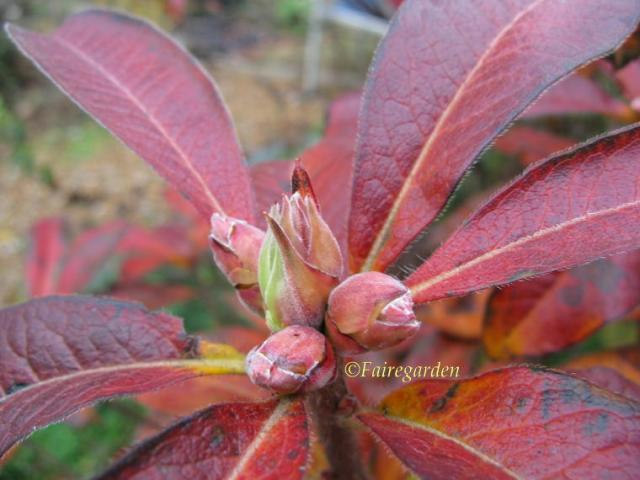 Four season interest is offered by these unique and seldom grown visions of exquisiteness. Winter buds on graceful branches, flowers like nothing else on earth, and fresh fuzzy green leaves turning to shades of crimson in fall offer something to be appreciated every day of the year.~

The term paper length of this post is to get the word out to the gardening public to give these shrubs a try. Many good nurseries offer several varieties. Remember that any with *lights* or Northern lights in the name will be much hardier than others.~Above from left, Admiral Semmes, Mandarin Lights, Primrose, Crimson Tide, White Throat, Arneson Gem and the smaller orange in front is Gibralter. These are the ones that can be captured in one photo. Next spring more long shots of the groupings will be shown. 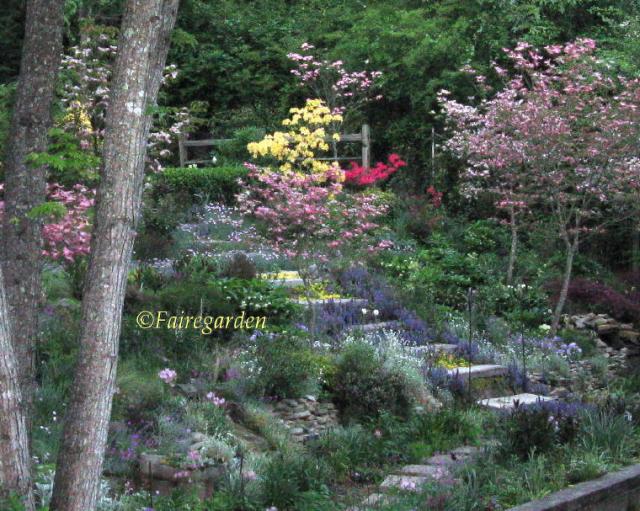 Mid spring here is a sea of pink punctuated by blue and white. The jumping jack flash of the yellow azaleas adds just the right touch. In the above photo are the first plantings here of this shrub that were given up for dead after being chewed to nubs by a teething puppy.~While buying these potted and blooming is the best way to know exactly what you are getting, Forestfarm Nursery is a good mail order source. Do watch for them at your local big box store arriving in bud. Even one gallon sized plants can bloom the first year planted out, just look for those fat juicy buds.
Frances
~~~
Plants I Grow-Deciduous Azaleas

This entry was posted in Plant Portrait. Bookmark the permalink.

54 Responses to About Those Azaleas-My Signature Plants