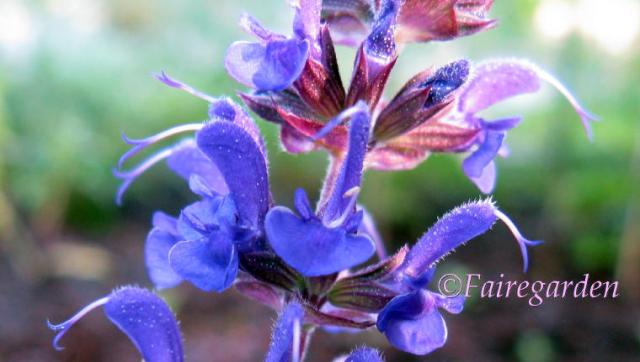 There was an area of the Fairegarden that was not meeting expectations. Although for the month of September, it is the most glorious and admired section, the rest of the year is pretty ho hum. 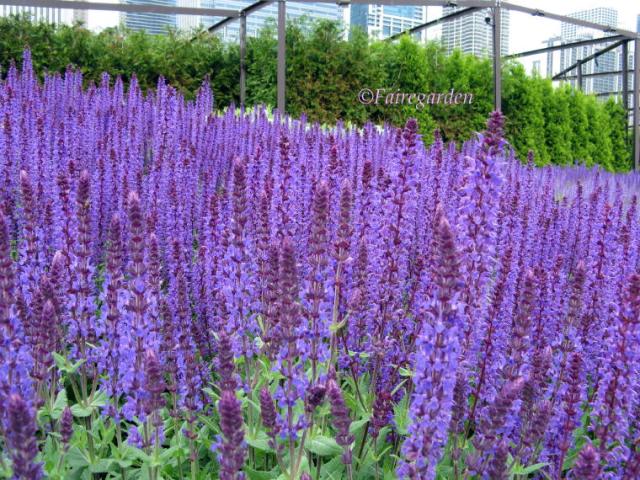 Ideas to improve this bed by enlarging it and adding plants with seasonal interest besides fall have been the goal. Last fall Allium ‘Purple Sensation’ and A. sphaerocephalon were added in between the Muhlenbergia capillaris clumps. White and pink Astilbes were planted along the lawn edge also. While this was a good start, after seeing the Lurie Garden at the recent Chicago Spring Fling, shown above, the light bulb came on in the cinnaberry topped thinker. The Aha moment, so to speak. At the Lurie were rivers of blue composed of four kinds of Salvia x sylvestris, S. ‘Wesuwe’, S. ‘Rugen’, S. ‘Blue Hill’ and S. ‘May Night’. We already grow May Night and Blue Hill, along with many other Salvias, including blue hued S. ‘Caradonna’. The opening photo is a close up of May Night in our garden.

The plan had formed and the work began June 5, 2009. First the lawn edging of Liriope was dug up and laid in place to form the new outer edge of the bed. Newspapers from the recycle bin were repurposed to smother the grass and clover that was growing poorly and well respectively in that area. Boards leftover from the garage deck redo, thanks Gardoctor, were placed over the paper to hold it in place overnight after being hosed down. Fifteen bags of soil conditioner were purchased at the big box and placed along the edge by The Financier, thanks for the muscle, hon.

The next morning was cloudy and cool, perfect weather to move plants. Ten bags of mulch did the trick. The three Caryopteris ‘Summer Sorbet’ shrubs were respaced from the top corner to one at the lowest point and the other two midway and staggered. These two will be a divider between the Muhlenbergia capillaris that was spread to the new width of the bed in the lower section and the other plantings. In between the transplanted muhly are seedlings of Verbena bonariensis taken from the gravel path. This plant grows tall and spindly and attracts butterflies as it blooms spring through fall. It should be tall enough to show through the blooming muhly. White Astilbe arendsii winds down and in front of the middle Caryopteris. The pink Astilbe was relocated to the heather bed. Among the Astilbe are pieces of Amsonia hubrichtii, another plant used at The Lurie that we already had. Added: Also planted among the white Astilbe are seedling Longifolium Asiatic Lilies ‘Royal Fantasy’.

In the middle section, above the Astilbes are one piece of Persicaria amplexicaulis ‘Firetail’, purchased last year for the daylily hill redo. Click here to read that story. We hope to spread this plant about more, but one piece is all that could be spared for now. Looking very sad and droopy are white Gaura lindheimeri. These object to being torn apart and transplanted but usually will perk up after a few days and diligent watering as we hope will happen to all of these plants taken from elsewhere on the property and torn to bits. The itty bitty teeny weeny seedlings are ironweed babies, Vernonia gigantea? that were discovered at the end of the knot garden just this week. We have been collecting seeds and scattering them from our one plant that was already growing here when we bought the property for years. Either I only now know what the babies look like or it has taken all these years for germination. Let us hope for a few survivors. These will someday be huge plants covered in dark purple blooms at the same time the muhly blooms if the garden fairies are willing. The criteria was tall and fall blooming, Vernonia should fill the bill. In the left portion of the picture are pieces of S. ‘May Night’ with seed heads still attached along with S. ‘Blue Hill’ and S. ‘Caradonna’. The plan is to sprinkle the seeds about the bed to help fill in.

In this view from the gravel path that goes from the driveway to the back gardens, the pieces of Sedum ‘Matrona’ are on the right along the Liriope edge. Amongst the sedum are clumps of Camassia quamash bulbs that were taken from under the large pine trees. On the left are annual Dianthus chinensis with dark red flowers. These are perennial here for a few seasons and often self sow. An orange lantana, coleus, alyssum, euphorbia and who knows what else is in the far corner. These had been planted before the redo idea was formed and may or may not be moved elsewhere. Are you wondering what is planned for the space at the very front? 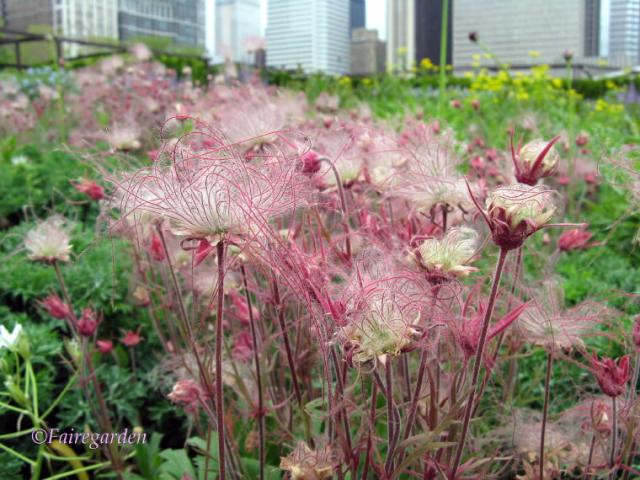 The plant that won our hearts at The Lurie, Prairie Smoke, Geum Triflorum will be placed in the front row. Seven plants were ordered from High Country Gardens and should be shipped next week. We do grow several types of Geums here in another area, so it is with crossed fingers and toes that this one will find the conditions in the new bed to its liking.

Here is the after shot of the newly planted bed. This photo will become the before shot when everything fills in. That is the plan anyway. As with most garden plans, there will have to be editing and tweaking as the plants sometimes have different ideas than the gardener. It will take years for the vision to be realized…

…Except for the muhly grass, it has already surpassed its assignment. This photo was taken last September, 2008. While we wait for the rest of the plantings to play catch up, the pink cotton candy poufs should keep us distracted.
Frances

This entry was posted in before and after, Design, Road Trips. Bookmark the permalink.