One of the first botanical names learned here at the Fairegarden was the purple coneflower, Echinacea purpurea. Having never heard it pronounced, it seemed a good idea to remember the spelling by saying it phonetically, E-china-see-ya with emphasis on the big E and the see. We were into herbs at the time and this plant was reputed to be useful for headaches among other ailments. Many tomes about herbs were purchased and checked out from the local libraries, learning the lore and cultivation requirements of the useful plants.
~
Shown above is Echincea ‘Sunrise’.

Fast forward to present day. There is an explosion of interest in this plant now, due in no small part to the breeder’s efforts to introduce new colorways to the species pinky purple and white. The correct pronunciation has been learned, (ek-in-AY-shee-a), but the spelling helper remains embedded in our consciousness.
~
Shown above is Echinacea ‘Sundown’. 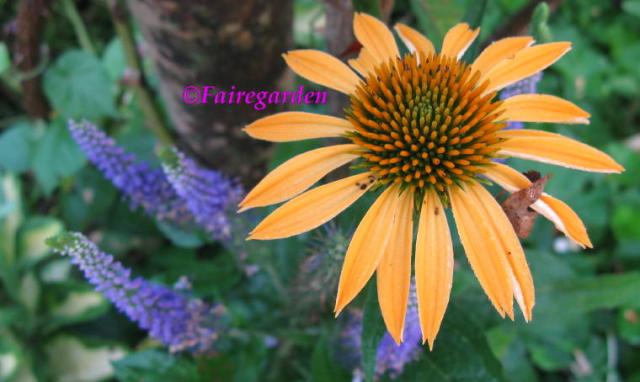 Some of these new colors were not as hardy or vigorous as the old faithfuls, but the strong have survived to be offered widely at nurseries and home improvement stores.
~
Shown above is Echinacea ‘Harvest Moon’ accompanied by Veronica spicata ‘Sunny Border Blue’.

The Big Sky series developed by Richard Saul of ItSaul Plants in Atlanta, Georgia has been responsible for many of these color breakthroughs. The purple E. purpurea was breed with the yellow flowering E. paradoxa to produce these popular varieties.
~
Shown above is a group of Echinacea ‘Sundown’ in daughter Semi’s mushroom compost enriched bed.

Last year a new to us species was brought to our attention by good friend and lover of native plants, Gail of Clay And Limestone, Echincea tennesseensis. She even gifted us with one when we went to visit her in Nashville named E. ‘Rocky Top’. This plant has a long tap root unlike the other coneflowers and can grow in the rocky ledges of her area. We have smaller rocks on our slope and Rocky Top has made itself at home. Several more were purchased this spring and one seedling has appeared from plant number one. As with all plants, a mass planting looks best. We love the recurved petals.
~
Shown above is E. ‘Rocky Top’ at home in the shed bed amongst Lilium ‘Regale’, Nasella tenuissima and Belamcanda. 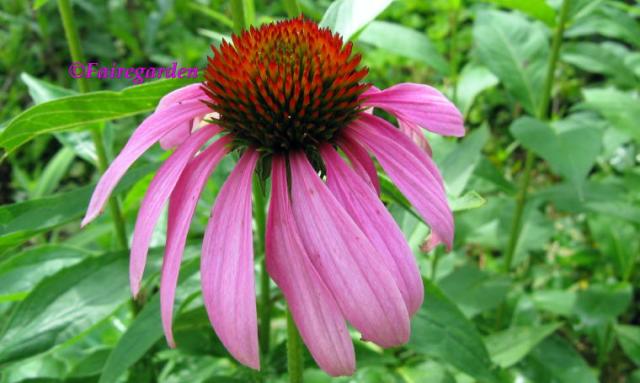 The most plentiful coneflowers here are the straight up purple pink of the species. Plants and seeds were brought here in 2000 when we moved from Texas to Tennessee. Various seeds have been saved and sown to provide many plants that are moved to desirable areas when large enough.

For landscape use, the white flowered form, most of which are E. ‘White Swan’ make a nice counterpoint to the pinks.
~
You might have noticed that no mention has been made of the odd double cone cultivars or those with green flowers. There is a good reason …(cue the scary music, Night On Bald Mountain by Modeste Moussourgsky*)

…The image above was taken in my garden last August. We have had similar malformed flowers in previous years. Research revealed the cause to be a viral like disease called Aster Yellows. A healthy Echinacea purpurea shows purple ray flowers on a cone-shaped head. Infected with the yellows organism, these flowers turn into distorted, green leaflike structures. Infected plants are usually stunted, often with yellow or reddish leaves. Yellows disease is caused by a microorganism called a phytoplasma.
Phytoplasmas live in the phloem (food conducting tissues) of their host plant. The disease is spread from plant to plant primarily by phloem feeding leafhoppers. The leafhopper acquires the phytoplasma while feeding by inserting its stylet (a long, slender hollow feeding structure) into the phloem of infected plants and withdrawing the phytoplasma with the plant sap. After an incubation period, the insect spreads the disease organism to healthy plants as it feeds. Aster yellows is a disease that affects over 300 species of plants, including ornamentals such as aster, coneflower, zinnia, marigold, chrysanthemum, petunia, and snapdragon. Edibles affected include lettuce, carrot, tomato, and celery. Grasses and grains also are hosts. Weeds that may harbor the disease include plantain, dandelion, and other broad-leafed weeds. The spread of aster yellows is worse in cool, wet summers. Hot dry weather is not favorable for either the phytoplasma or the leafhopper. As with many disease and pest problems, diagnosis is perhaps the most important factor in controlling aster yellows. Infected plants cannot be cured and should be removed. We have removed all plants displaying these symptoms, but it was a couple of years before we realized what was happening and even thought them slightly cool. Now when I see the flowers stacked on flowers types of Echinaceas, or those with green petals, a shudder runs down my spine for it is way too similar to the Yellows abnormalities.
~
For more information check out this link to the Missouri Botanical Garden’s Integrated Pest Management site.

Does this mean that we should rip out all susceptible plants? Not in my opinion. What it means here in the Fairegarden is that the host weeds of plantain and dandelion will be swiftly shown the door to the trash can, wrapped in hazmat plastic bags, not thrown in the compost. Any odd looking flower heads will spell the death sentence to the offending plant. It has only been seen on Echinaceas though we grow many of the others that can be affected.

Healthy Echinaceas are too important a plant to pollinators and wildlife to be dismissed. The seed heads are a source of food for the birds and the bees visit the flowering cones. The human pursuit of happiness is also greatly enhanced by the existence of these garden treasures.

In closing, the point of this warning, with the stomach turning descriptions is to recommend extreme vigilance in your own gardens. Look closely at any flowers that seem oddly shaped or the yellowing of foliage. Echinaceas are among the top must grow perennials in most areas. The pros outweigh the cons but be aware of the dangers that lurk.
~
But what about the plant shown above? This purchase was made last year while on a trip to a wedding in Pennsylvania. The tag read Echinacea ‘Double Decker’ and it is definitely an Echinacea. It looks like a variation of E. ‘Coconut Lime’ gone awry. I knew it was not what the tag stated and bought it anyway because of the unique petal arrangement. Is it somehow related to the diseased mutants? It has not produced seeds, possibly because the insects cannot manuever on the coneless flower head. Right now it is on the *watch* list. Should it stay or should it go?

Frances
*To see the scene from Disney’s Fantasia featuring this piece of music, click here.

This entry was posted in info, Plant Portrait. Bookmark the permalink.