Posted on December 7, 2009 by fairegarden 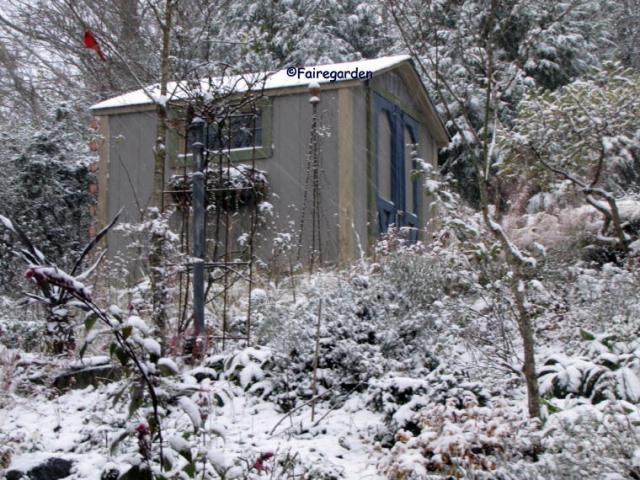 Today, the second birthday of Fairegarden the blog, we invite you, dear readers to join us in a stroll down memory lane. (Yes, we had a little snow recently. More to come about that later.)

Anniversaries and birthdays always bring about feelings of nostalgia and thoughts of the past. Let us travel in the time machine back to 1976 northeast Pennsylvania, when we bought our very first home. Renters for many years, the above house was really ours, all ours, and our first patch of earth to have and to hold and to plant. The photo shows our oldest child, Chickenpoet on her tricycle at the age of three and one half in the spring on 1978. There was a vegetable garden out back along with a couple of apple trees. A rose garden was also back there, tilled up from the sod at the same time as the veggie bed by a fellow who charged five dollars to do both. The photo quality is poor on all of these shots as they were scanned from old snapshots, but perhaps you can make out the soldier straight row of gladioli in front of the metal railings between the bun shaped yews that came with the property. Originally there were three buns along the railing, but in a bold move we dug one out to make room for flowers. 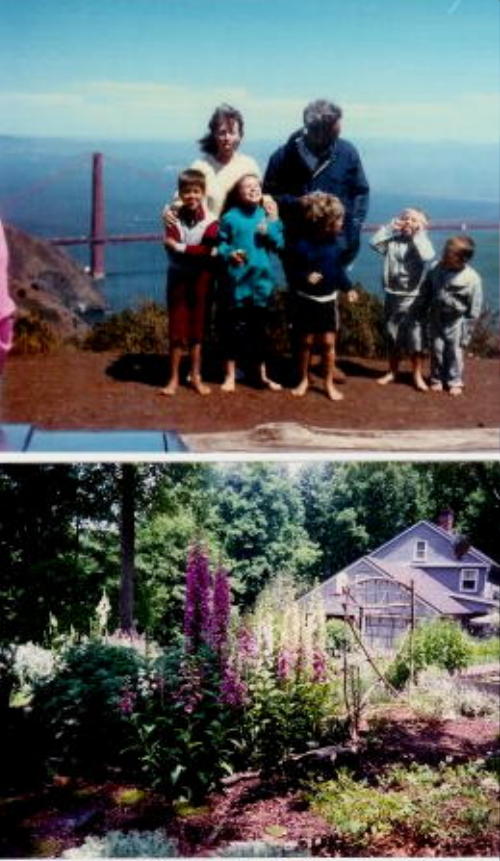 We lived in the Pennsylvania house for eleven happy years, birthing a total of four children while living in the three bedroom one bath home. In 1985 The Financier’s job transfer took us to southern California. While waiting for the closing on the home there, we traveled to visit friends who lived in the San Francisco area. We went to an overlook of the Golden Gate Bridge as part of the tour. The two children of our friends are flanking turquoise sweatshirted Semi while Gardoctor and Brokenbeat, the youngest, are to the side. Chickenpoet refused to be in the photo, she still is somewhat ornery about having her picture taken. We lived in California for three years. While scanning these old photos, two were sometimes scanned at once to save time. The lower half of this duo is from our garden in northeast Tennessee. We lived there for nine years. After Brokenbeat entered first grade I was suddenly home alone with time on my hands. As I told a friend, I could now read a magazine from cover to cover in one go. Gardening was attacked with gusto, learning all that could be gleaned from books and magazines. We had one acre of wooded land, it was paradise.

While still living in the northeast Tennessee home, we purchased a small house in southeast Tennessee, the same one where we now live. Daughters Chickenpoet and Semi were to live in the new house while attending college and we would have a place to stay when we visited them, about two and one half hours from our home. The arbor was built for the newly planted rose that later came to be known as Killer, Rosa ‘Alberic Barbier’. 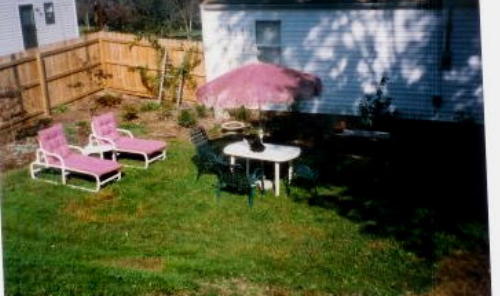 Planting was done at the smaller house after several dying trees were removed from the property. There was a steep slope behind the house, very steep. When we had the back fenced, to offer some privacy for the bikini clad, we hope, sunbathing girls, we were quite surprised to find that the hill was also part of our land, a total shock. Here is the view from the top looking down on the back of the house with the new fence. 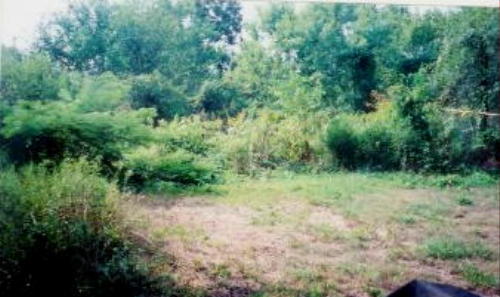 This is the scary view of the slope, after it had been mowed as far up as we were able to push the mower. Men with chainsaws had been hired to clear the hill, but they had left the site before finishing when stung by wasps who were living in some old fruit trees. Chickenpoet gave them the check I had left for her to pay them the agreed upon price and they never returned. The fact that a photo was even taken of the hill is astonishing, it was neighbor Mae who suggested it as a before picture. The wooden fence was on the flat area, chain link was used to go up and around the slope. 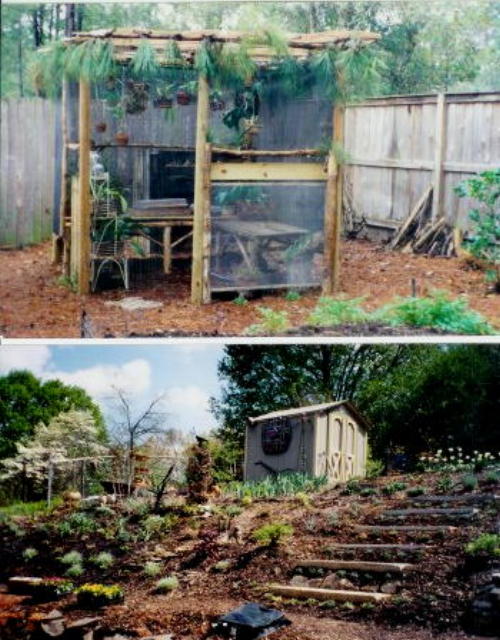 A year after buying the second house, yet another job transfer took us to southwest Texas. We lived there for three years in our first brand new construction house. The back yard, which was laughingly called *oversize* was a blank slate. Or as blank as a slate can be with hundreds of pine trees on it. The homes were built with sensitivity to the trees in the development, it was up to the homeowners to clean it up or hire it done. We had a watering system installed and the whole thing mulched. Paths were laid out and beds created. A foray into furniture and garden structure building took up much of our gardening activity, thanks to the knowledge of Gardoctor, who was in high school along with Brokenbeat. The girls remained in Tennessee. The photo shows the last thing we built before moving back to Tennessee, an orchid tea house. The bottom shot is of the newly cleared, terraced and planted hill after the final move back to Tennessee, three years after leaving to go to Texas. The shed was moved to the top of the slope and the steps were installed. If you look closely at the poor photo, you can see that the long block wall at the bottom has yet to be built. But the plants were in, always a priority. 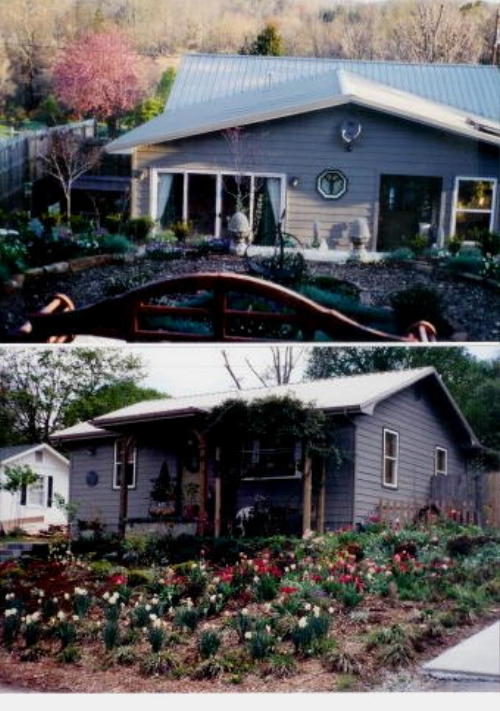 A couple of years later, and many dollars lighter in the bank account, the renovation of the main house is complete. The rose Killer has regrown after being cut to the ground when the house was resided, a new metal roof put on covering the front stoop and painted. 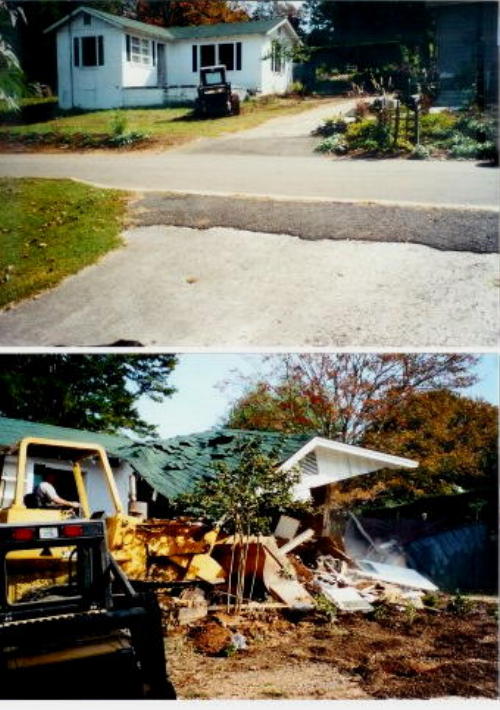 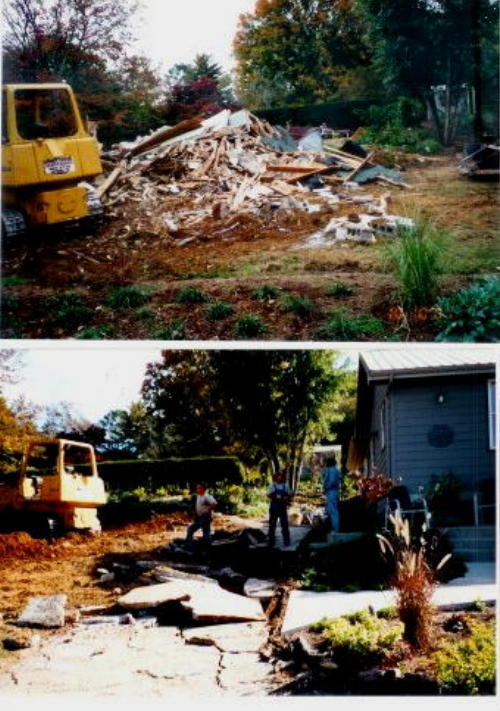 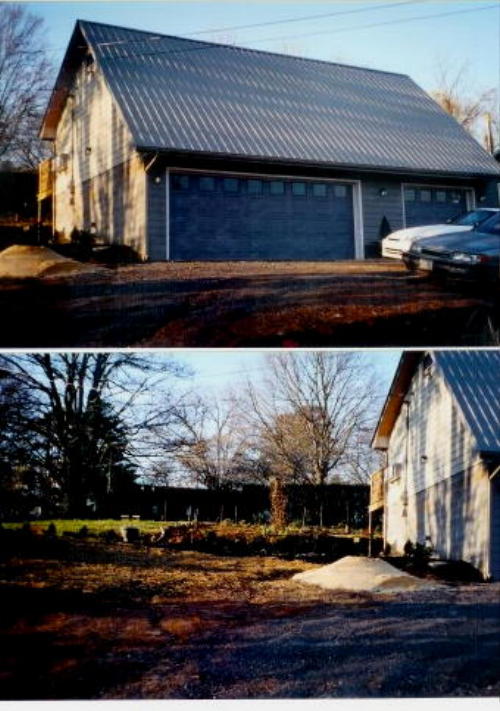 Regular readers, (a big kiss and hug for you all!) have heard mention of the house next door that was purchased, knocked down and the garage built. We did move into the little house while the renovation was being completed. Seen above is the demolition and new garage. The driveway paving came later as our finances had to be rebuilt, once again. I am standing on the steps, all in denim talking to the contractor. Never to wear that ensemble again after seeing the photo. Neighbor Mae took this series of pictures. Her son built the garage and the addition that combined the main house to the garage a few years later, when finances regrew.

Ricki of Sprig To Twig tagged me for the Honest Scrap Award.
I do appreciate this honor, although we never follow the rules of these awards. While I have provided a link to Ricki, there will be no praising of the award nor will it be passed on in the normal sense. If anyone reading this would like to be awarded and write a post about themselves, consider it yours and have at it. The award will go into our trophy case on the awards page which can be clicked on our sidebar listing of pages. As if the above life story that has been illustrated is not enough, here are a couple more things that might interest you, or not.

While we still were living in Texas, we became grandparents. When Chickenpoet told us she was with child, I literally fainted, falling down to the floor with the telephone still being grasped. I was present for the birth of MA, a happy day indeed. The Financier was informed that we had to move back to Tennessee. Period. He made it happen, for which I am eternally grateful. Upon becoming a grandmother, it seemed like a good idea to get a tattoo. Don’t ask how this reasoning occurred, but suffice it to say that on a visit back to Tennessee, there were many many trips made in the gas guzzler from Texas, by myself, driving all in one day, fourteen hours to the small house where Semi now lived with various roommates, sixteen hours to Chickenpoet’s house in northeast Tennessee, could this sentence get any longer? yes it can, Semi talked me into going to a Tattoo parlor in Chattanooga. You see, she had a coupon. The look on my face says it all. And yes, it hurt like crap, excuse my language.

One more little item before we close.

I am from Oklahoma, Tulsa to be exact. Near my parents house was a wonderful city park full of plantings, paths and rock structures, including this grotto over a fish pond. I would spend many an hour climbing and playing at this park, even after growing older. I was fourteen at the time of this snapshot, taken by my girlfriend and partner in crime, Amy. We were in middle school and the teacher of Social Studies, do they still have that class? was a young fellow, just out of college. We used to hang around after school and beg him for rides in his fancy car, I believe it was a new GTO but could be mistaken. Added: the car was a Chevy Supersport, with little fancy criss cross flags on the back. It was a nice car and he was willing to give us a ride, on one condition. He had a large wooden paddle, used daily on rowdy students, always boys, giving them swats at the front of the class. It had holes drilled in it, for extra pain. He told Amy and me, or maybe it was our idea, that if he swatted each of us he would then give us a ride home in his car. And don’t tell anyone. Well I am now telling. He did not hold back with that paddle either and it hurt. Worth the car ride? No way. We never did anything like that again, but his class was the only F that I ever received. Of course it was turned into an A with a couple of artistic pen marks before my parents saw it. There are lots of paths that can be taken from this confession. I suggest we not follow them but will leave you with one little tidbit more. When this teacher would call on me in class, he would say “Lolita, er Frances”. At the time I had not read that bit of prose, or seen the movie if it had even been made yet, but knew the gist of it. Don’t ask.

This entry was posted in before and after, Musings. Bookmark the permalink.