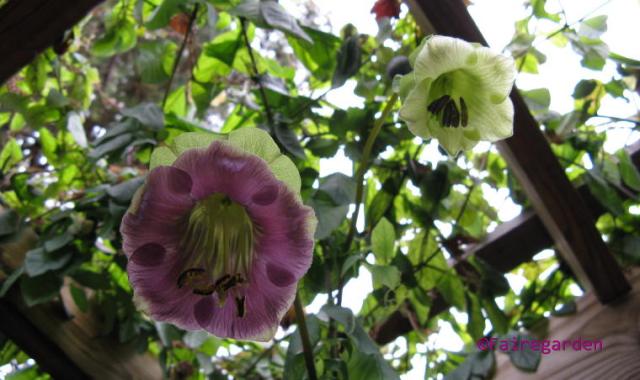 There have been hard freezes here, killing freezes. It will be a challenge to find something, anything with a real flower on it, but we do love a challenge so out we go with the camera. The first place for searching is the large arbor at the eastern property edge that was built by offspring Gardoctor. Click here-An Arbor to read the story. Last winter seeds were planted in the greenhouse/sunroom of Cobaea scandens. In one season this plant covered the structure. Hardy only to zone 9 and below, it was not expected to survive above ground during our zone 7a winter. The leaves and flowers on the outside of the arbor are toast, but inside a few flowers remained to be captured. How much longer these will continue is unknown, but we are hoping that the roots will regrow next year to reward the heaviest of mulching. If not, it will be back to seed starting. Updated, the whole plant is now toasted, or mushified, as the last frost took care of those two hanging in there blooms. At least they got to be included for bloom day. A seed pod was picked in hopes of viable seeds, but we believe it was much too green. The original seed packet was found to still contain a few seeds that will be sown now in the greenhouse. 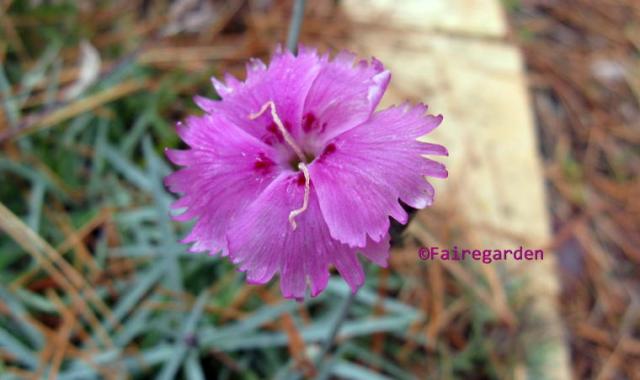 Feeling rather smug about the Cobaea, we saunter along the gravel and wooden post path towards the front, passing by what is referred to as the flat bed, that used to be the gravel driveway for the house next door. It is a tough condition for growing things in that compacted stony soil, but the dianthus likes the alkalinity and has self seeded among itself to produce various flower colors and forms. We do sprinkle the wood ash remains from the Thanksgiving fires in the little firebowl here to lime it up even more. The solitary bloom grabs the eye of the camera. 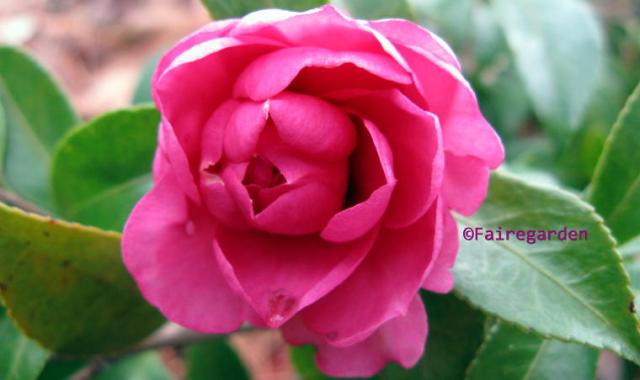 Onward past the arborvitae hedge that separates the back from the front, we check under the tall pine trees to see if the Camellia sasanqua ‘Chansonette’, which means little song, (thanks Linda!) has any intact blooms. It does, and there are even more buds that look unharmed. A good thing. 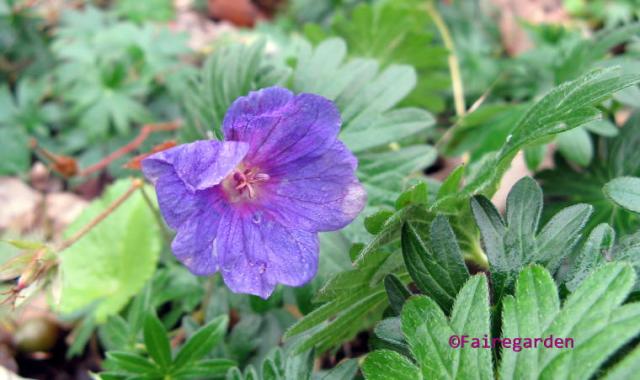 In the harsher climate of the front gardens, they are more exposed and the lowest land of the Fairegarden, the unknown Geranium is sputtering out the odd bloom here and there. Even with a bended ear, the blueish coloring brightens our day, yet another without sunshine. 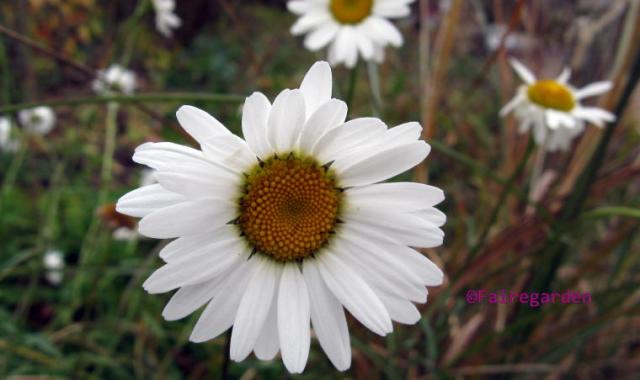 In the same area the Oxeye Daisy, Chrysanthemum leucantheum is a tough pioneer wildflower. This is one plant that will bloom at times in all twelve months of the year. Most get ripped out for it is a promiscuous seeder, but some are always left to provide the cheering daisy face on dreary days. 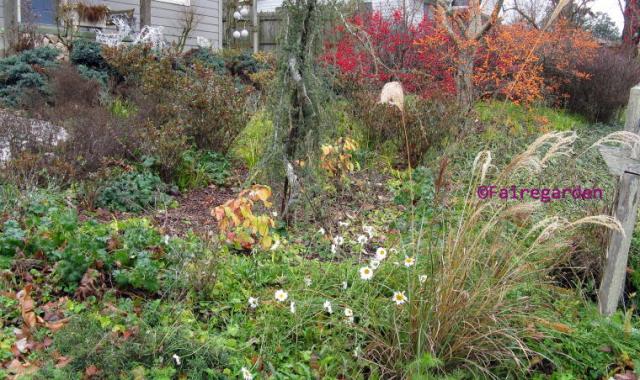 Time for a reality check. This long shot of the front garden shows we are not exactly awash in flowers, as the macros above might suggest. The daisies by the mailbox are the most floriferous plants at the moment. The winterberry hollies are brilliant if not blooming. 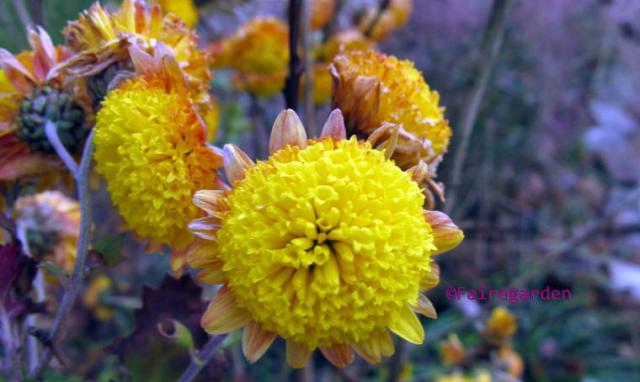 Returning to the back gardens via the circular driveway, the still unidentified yellow button mum is noticed at the end of the muhly bed. 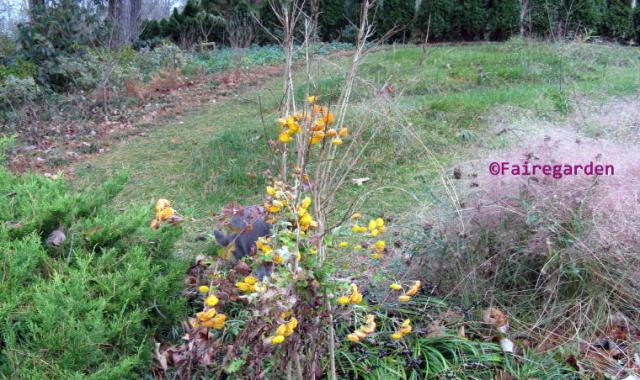 This long shot shows that the previous statement about the daisies having the most blooms is erroneous. The floppy late blooming long lasting mum has been woven up into the young crepe myrtle stems to best effect. The muhly still is attractive though fading. 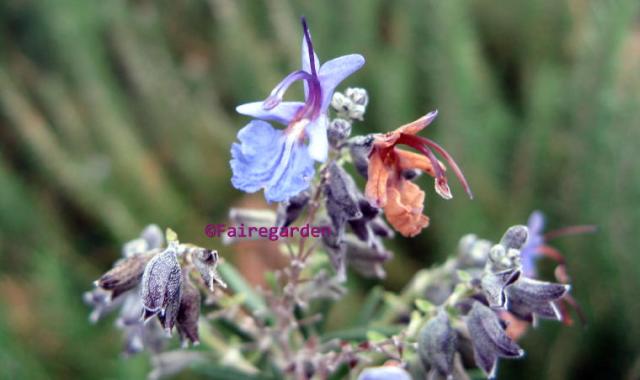 Hiking back up the paths, we search for undamaged Rosemary flowers. It is interesting how the frost will fry one flower while one right next to it will remain unscathed. The blue flowers of the rosemary are said to get their hue from being brushed by Mary’s cloak as she rode the donkey to Bethlehem, turning them from white to blue. 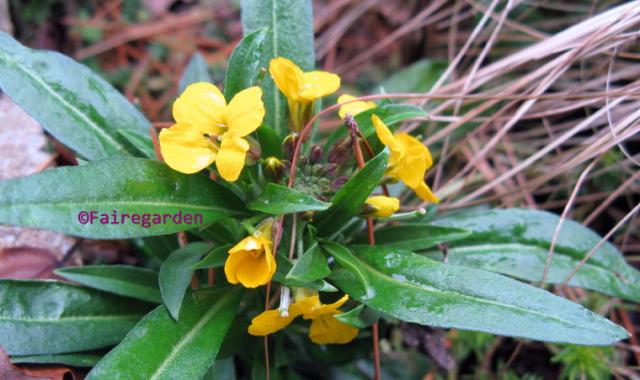 Vastly underrated and underused are the wallflowers. Erysimum cheiri ‘Cloth Of Gold’ has self seeded prodigiously in the gravel paths by the original seed grown plantings. The young ones showing the most promise are spread to other beds. This one is in a walled planter, somewhat protected by larger evergreen perennials. The intense color is so very welcome at this time of year. It seems to laugh in the face of frost. 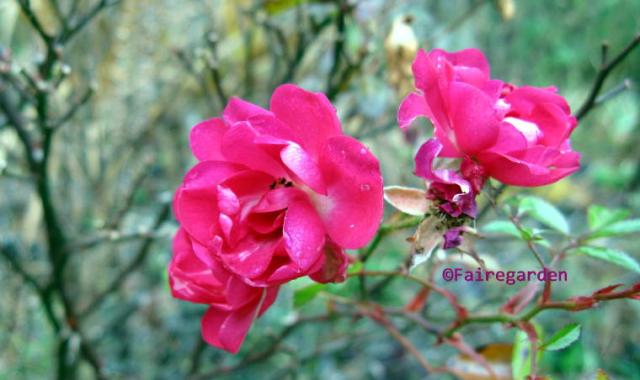 Another fearless in the battle against the icy fingers is Rosa ‘Fairy Queen’. There are not enough words to enthuse about the blooming properties of this small rose. Our first was a gift from daughter Semi, who has three tightly planted bushes in her garden that never stop blooming, with zero care as prescribed by the Semi-Piet style. Ours was planted in a poor place initially and was moved to better soil a couple of years later. It blossomed and another was added when spotted at a local nursery. Do seek this one out. 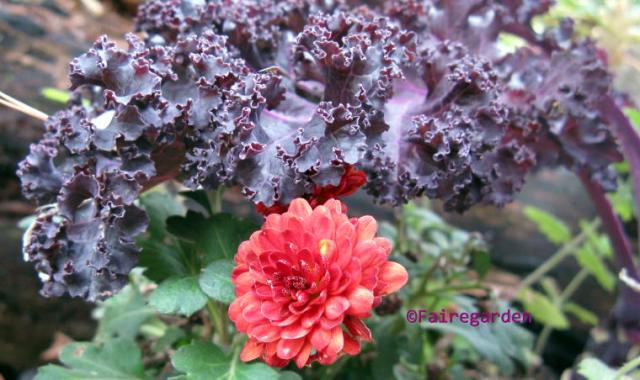 Situated at the base of a large Sambucus ‘Aurea’ next to the garage, this marked down container of kale and mums among others from the big box store surprised us with the reddish flower. Microclimates can help continue blooming of hardy souls. 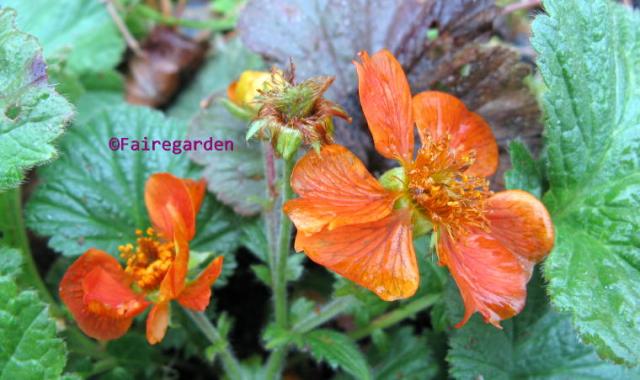 Showing what happens when the liquid in the veins of flowers goes below freezing, this Geum borisii ‘Tango Boris’ still is holding good color. We were on a thing a couple of years ago collecting geums after buying this one at the big box store. A few more were added and they will get a post of their own at some point in time. This does seem an off time for blooming however. 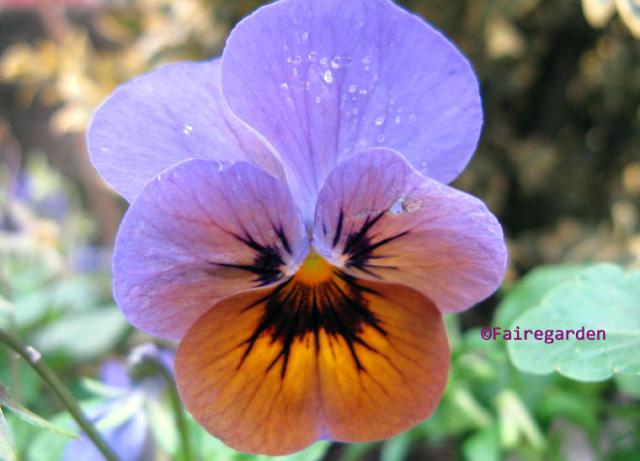 For outdoor winter color it is impossible to find anything more cheering than the violas. Several flats of various colorways were planted this fall. They will bloom in all but the very coldest of winter temps and come spring, the expanded root system will support masses of flowers unequaled by spring planted ones.

Pulling back we see the reconstructed rock wall by the path from the lower deck. Since this area is what is gazed upon as the computer keys are tapped, it gets the best of the best in the way of plantings. The blood grass is still showing some red and the dying daylily foliage is turning an attractive golden. Fallen maple leaves have tucked themselves among the growing things, providing insulation from pesky weather. There are other things in bloom, but these are the best photos and as always, that is what gets shown for the special day known as Garden Bloggers Bloom Day, invented by the lovely Carol of May Dreams. Now, have we forgotten anything? 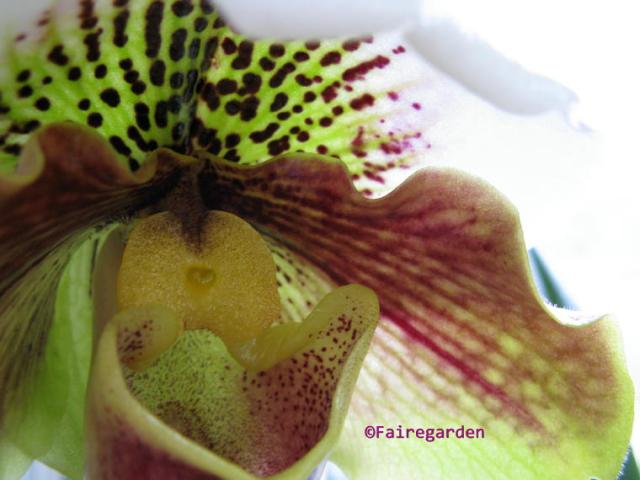 Oh yes. There is this orchid blooming in the greenhouse. Paphiopedilum Quasky #3 x Quasky #4. Once entered in a beauty pageant with embarrassing results, it is blooming several months early this year. Thanks for the memories, Quasky, my dear. And Carol. 🙂

All images for this post were taken with a Canon Powershot A720 IS, our old camera.

This entry was posted in Garden Bloggers Bloom Days. Bookmark the permalink.