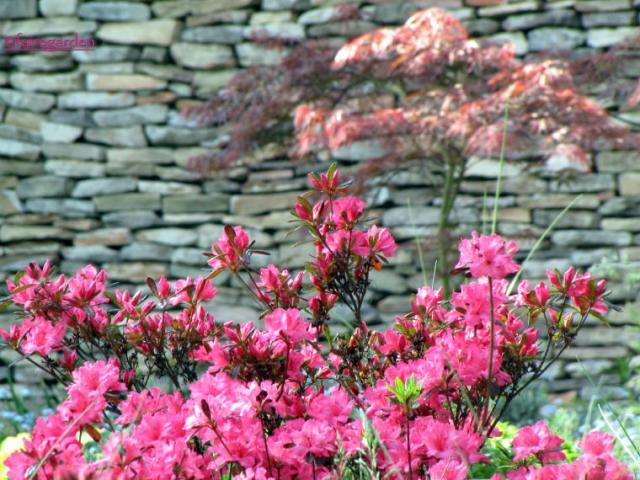 Or maybe it should be no mo’ mow? Or to be more honest, just a little bit of mow? Whatever clever title for this post wins out, it is still about the same subject, the conscious effort when we moved here in 2000 to have no lawn. At the previous home in Texas, in a new subdivision that was built around an existing pine woods with each lot having a designated area without sod, the lawn was totally eliminated. Not having to mow was bliss, although most of the neighbors hired the mow, weedwhack and blow crew for their little bit of lawn that came weekly to disrupt the bird song for hours at a time as they did house after house. In this small inner city neighborhood in Tennessee, we use the term city very loosely here, it is the homeowners that do their own mowing, usually on the weekends. They have not seen the wisdom of no mow. Yet. 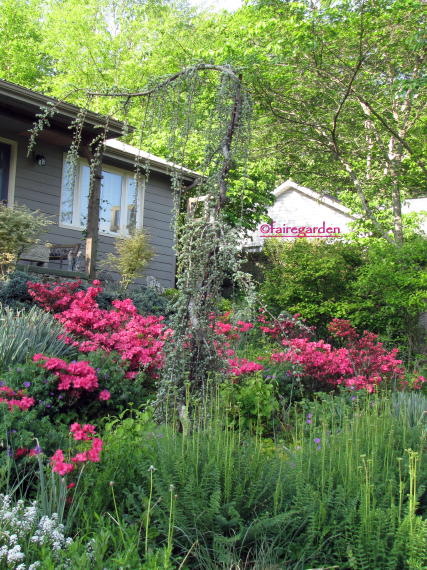 If not grass, then what, is the question on which they might be cogitating. We began with trees, a Yoshino cherry, dogwood seedlings brought here from our former northeast Tennessee home that have now grown to a nice size and a weeping Blue Atlas Cedar among others. 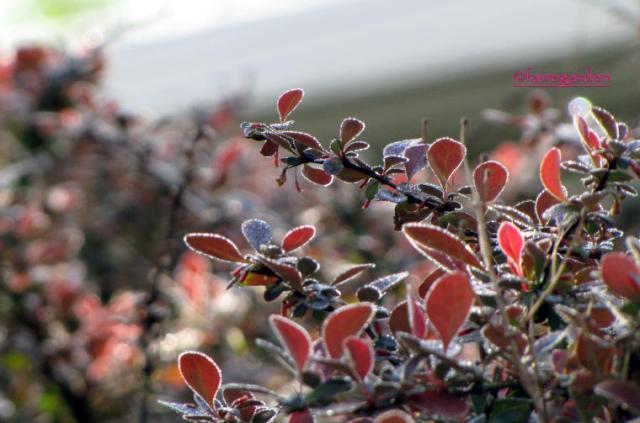 Then came shrubs. At the far west end, a group of Berberis thunbergii ‘Rose Glow’ have massed together with no pruning to form an inpenetrable thorny privacy hedge. There is a rental house next door that has been home to some unsavory characters. When offspring Semi and Chickenpoet lived here, it was referred to as the drug dealer house. Those people are long gone, but the barberrry remains. Let’s just say, no one is cutting across our front yard. 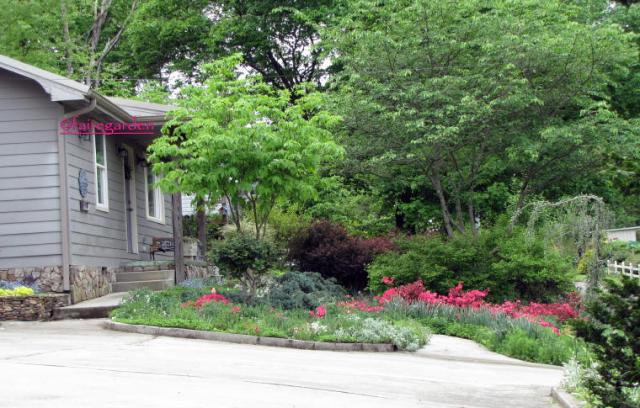 Moving across the front from the barberry barrier can be seen the cherry tree in the middle, underplanted with a variety of winterberry hollies, Ilex verticillata culitvars. Although now just green leaves, this is part of the all important winter interest and the gold and red berries have been enjoyed by human and bird alike. The next group of shrubs is the evergreen azaleas. 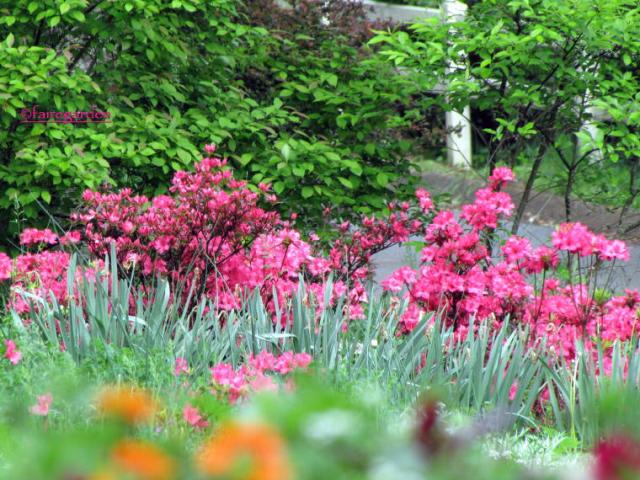 For better or for worse, one variety was chosen for spring color and evergreen winter leaf color, Girard’s Rose. Some of these were moved several times to get the placement just right and there have been losses. Luckily it is a variety that is available at the big box stores, or was. The decision has been made to not replace them as deaths occur any longer. Of course that has resulted in them having the best show ever this year. Nothing like the threat of removal to get a plant on track. There are daffodils along the street planting of several rows of liriope as well as along the walkway to the front door. Coreopsis verticillata ‘Zagreb’ has been added to edge the walk and encouraged to spread to the rest of the sunny areas. Golden leaf Acorus gramineus ‘Ogon’ is planted from one end to the other as a ground cover and gives a burst of color during the winter when the violets and other green weeds have gone dormant and the deciduous shrubs are bare. 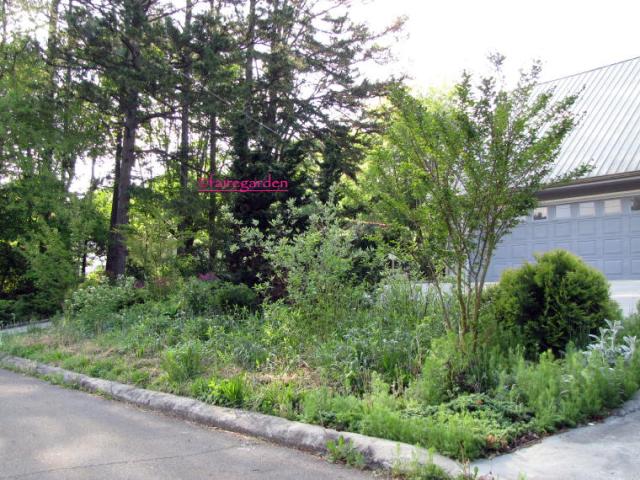 While the front yard of the main house was being designed and planted, over a couple of years, the house on the east side was purchased, demolished and a garage built. This resulted in an island of land at the street between the two driveways that were joined to make a half circle access. Originally planted with two pampas grasses at each end that proved to be entirely too messy, with its sharp blades blowing all over the neighborhood in addition to looking awful for several months of the year, there are now two crepe myrtle Zunis at each end, another seedling crepe myrtle that just appeared, some junipers, Chamecyparis, arborvitae, the rose Thorny and a group of red and yellow twig dogwoods. Liriope lines the street side but has been taken over by the thug Pennisetum alopecuriodes ‘Moudry’. Daylilies and asters are being added to the wildling goldenrods occuring naturally there. This year it was decided to not perform the end of winter mowing to neaten it up and it has looked pretty bad until now. The understory greens are filling back in but the tall stuff will have to be cut down yearly from now on. 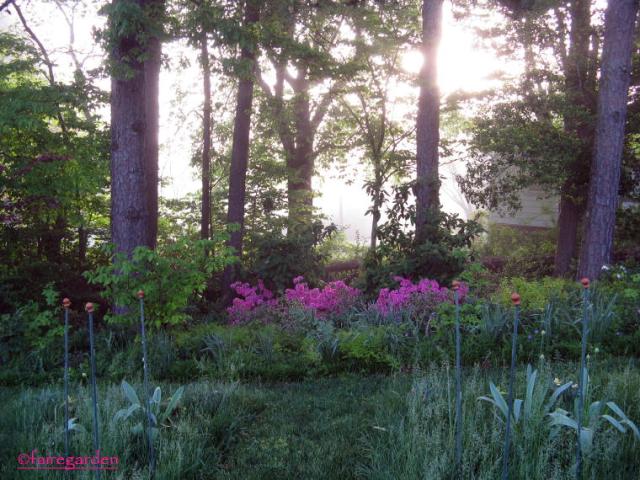 We now come to the east property line where the mature stand of Loblolly pines holds the fort. The area between the side of the garage and the pines was, and still is the only lawn we have, insisted upon by The Financier. Slowly the area has decreased in actual lawn grass, replaced with an ever growing edge of Pink Muhly grass, Muhlenbergia capillaris and other perennials. Last year the idea came to us to mow the area in fan shapes, letting the interior grow and cutting pathways between them two mower widths wide. Bulbs were added last fall and have been a rousing success. Lily bulbs were added recently, marked with the stakes and small onion finials. There will be an update post about the fan lawn later this summer. Hollies, azaleas Pink Ruffles in bloom now, roses, Edgeworthias, Corylopsis, Camellias, Viburnums and many more shrubs live under the pines. 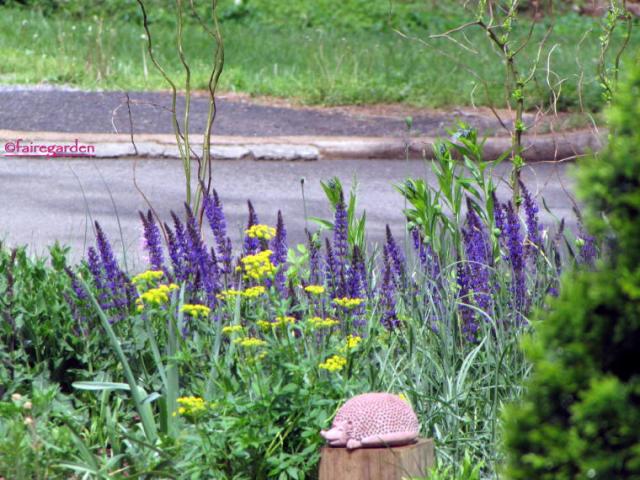 The enlarged Muhly bed was renamed the Fairelurie after the garden blogger’s get together in Chicago last year introduced us to the most fabulous of spots, The Lurie in Millenium Park designed by Piet Oudolf. To read the story click here-Faireluriegarden-Someday. In its second year, the swath of blue salvias is beginning to bloom, fronted by a recently added Golden Alexanders, Zizia aurea. There will be more to come about this bed as the season progresses. Cut branches of curly willow were inserted in the barren mulch last winter for some vertical interest. They have rooted but will not remain there. 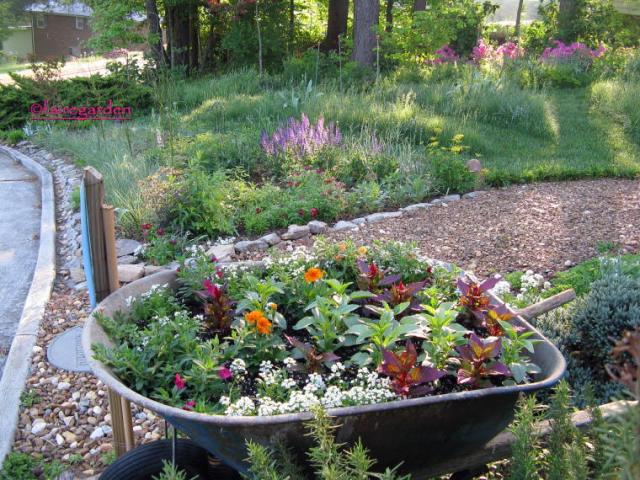 Opposite the Fairelurie is our newest project, a wheelbarrow planter. This too will be featured at a later date with the before and after shots. It already looks pretty good, we think. 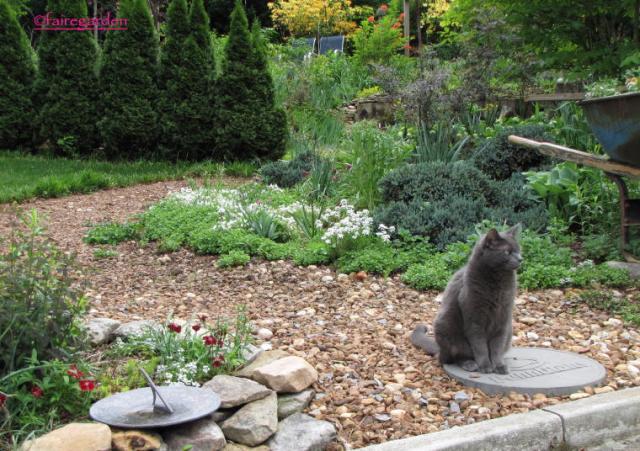 So there you have an explanation of our (nearly) no mow front yard. The back yard is also no mow, but being a very steep slope, it wasn’t really ever mown anyway, even before someone came and did some major earth moving with large machinery. In closing, Kitty would like to add, “Did we mention that the native azaleas are blooming?”

This entry was posted in cats, Design. Bookmark the permalink.

39 Responses to No Mow