With recent posts all about the breathtaking gardens seen on a trip abroad, the pouting Fairegarden was in need of some showing off. Call it sibling rivalry. As the mother of four offspring, we know all about the need for each to get their faire share of praise and petting.

The shed bed planting of Nasella tenuissima is simply shimmery in the early morning light as the bloom heads are forming. Belamcanda chinensis foliage is crisp and vertical whilst one of the Lilium Regales reaches for the sky. The stakes are for the developing Eryngium ssp., these supports need to be upgraded to something more attractive than rusted rebar if they are going to stick out like this.

On the other side of the shed, once blooming Rosa ‘Veilchenblau’ is peaking and peeking over the metal tubs hanging on the shed. 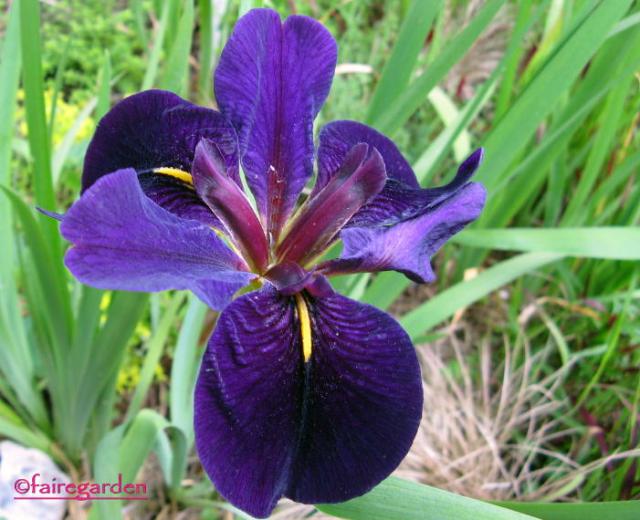 In the ground three years and the first time blooming are Iris x louisiana ‘Black Gamecock’.

One plant purchased from local nursery Mouse Creek was divided into three and moved to a sunnier spot last summer. That may have done the trick, some iris need nearly constant dividing to bloom, it seems. 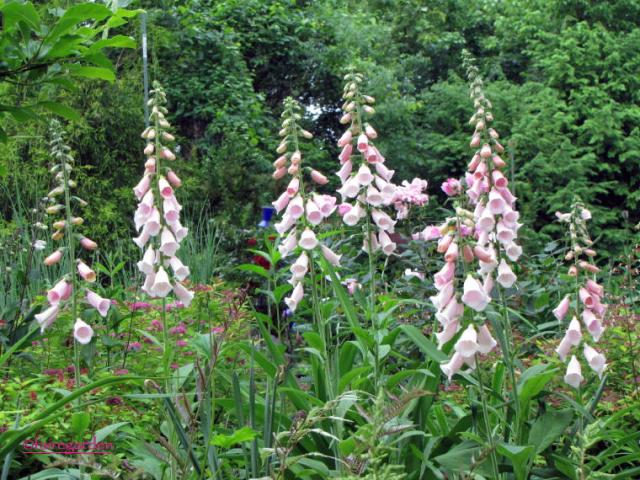 The bed below the garage deck is home to a kajillion voles. Many plants have been lost here, but the sinister plan of planting poisonous offerings, such as the foxglove family is paying off. All varieties of Digitalis are welcome here. This is Digitalis purpurea ‘Apricot’.

The pollen must be safe, however, for the bees are throbbing inside the fairy gloves.

The clemmies are having a stellar year with the rainfall of 2009 well above normal after two years of extreme drought. C. ‘Betty Corning’ is hugging the garage deck post with pale lavender blooms. It matches someone’s raincoat.

Also a vole haven, this raised block area was planted with a variegated Yucca filamentosa ‘Color Guard’ last year that survived any attacks. The Nasturtium ‘Yeti’ promises to brighten the scene with whiteish blooms. Coffee grounds were sprinkled over each seed planted to deter slugs and any other hungry varmints. It worked.

The seedling Heuchera that is growing in a patch of moss on a stone step bloomed this year. The stems and blooms turned out to be pink. That may require a rethink of the name we had settled on for it, suggested by the clever Mister Subjunctive of Plants Are The Stangest People, Faire Steel. Somehow that is just too masculine for this tough yet delicate flower. Any more ideas out there in the blogdom for a name? Japanese maple Crimson Queen, Hosta ‘Sunpower’ and a left behind Salvia ‘May Night’ from the round up of all blue Salvias for the Fairelurie complete the picture. 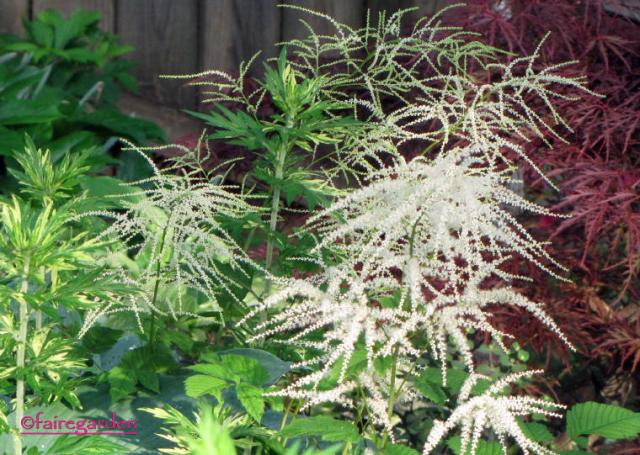 Looking the best ever, Aruncus dioicus with the horrible thug Artemisia vulgaris ‘Oriental Limelight’ and Japanese maple Garnet in the background.

From the other side, Garnet shades the now greening Hosta ‘White Feather’.

When we returned home from the England trip, The Financier asked how our garden measured up to those we toured. This was an idea that had never once entered the realm of thought, but instantly the answer was “Just as good.” I suppose that is bragging, but as with the offspring, a mother should love her own best.

*As ever, many thanks to Monica the Garden Faerie for the brilliant idea of Mish Mash Monday.

This entry was posted in mish mash monday. Bookmark the permalink.