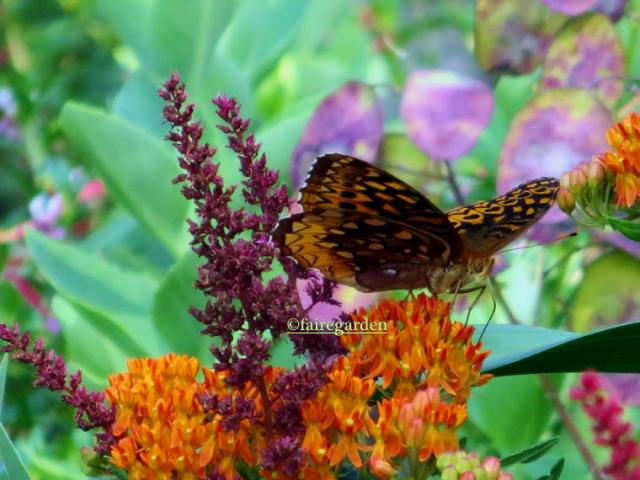 A Daliesque mustache shaped seedpod plucked from a sad looking plant on the racks at the big box store late in the growing season is how it all began. 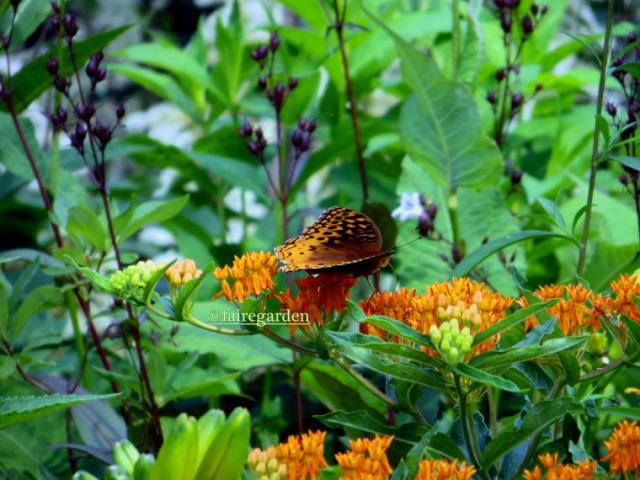 There was plenty of blank space in the garden then. A square of earth was scratched up and the seeds, still attached to their fluffly conveyances were spread about and lightly covered, watered well, then completely forgotten. 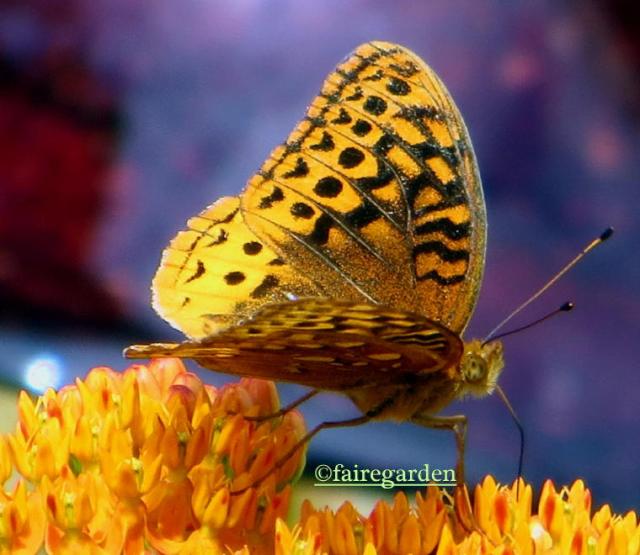 The next spring as poking and prodding happened in what was to become the Azalea Walk, the sturdy but short, hairy stems were noticed in a square patch. Ah, yes, those seeds of butterfly weed that were planted last fall, Asclepias tuberosa, we remembered. It was a couple more years before the young wildflowers achieved blooming size, they are slow growers. 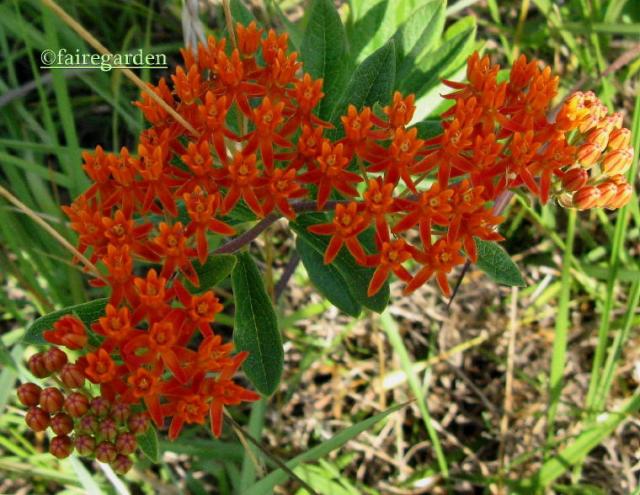 Asclepias tuberosa is most often noticed as a beacon of bright orange in fields and along roadsides. They are never seen growing in great swaths but rather as a handful dotting here and there amongst the wild grasses like exclamatory punctuation devices. Above shot taken in 2008 of a plant growing along the roadside out in the country where I live, Southeast Tennessee. I am standing so as to make a shadow over the flowers. 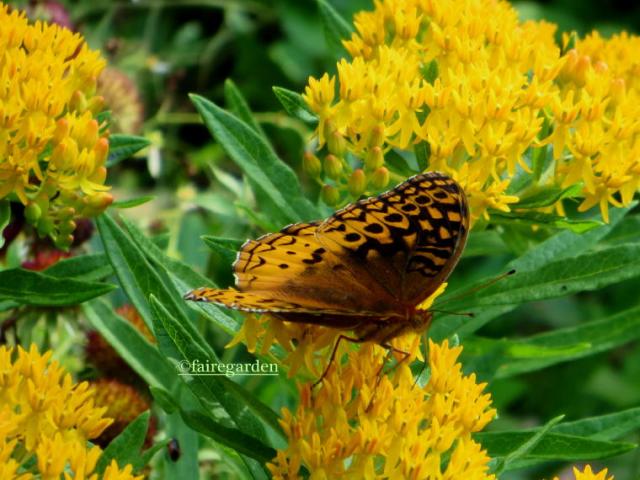 Said to prefer dry, rocky soil and full sun, we have that, seeds have been sown from both saved and purchased to expand the collection. A yellow flowered plant emerged from a packet of mixed seed, as well as a darker reddish orange. Last year a half tray of seedlings were purchased from Prairie Moon Nursery to speed up the swath so longed for, even if it does not occur that way in nature. Those are still small, not yet blooming size. Someday. Gardening is about patience and the passage of time. 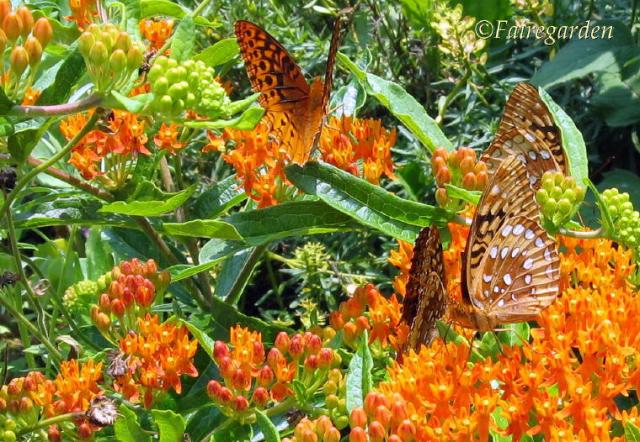 Once the mature size has been reached the buds will form, swell and show color for weeks before the flowers open. On that fine day, nearly to the moment of the big reveal, there are great spangled fritillary butterflies looping lustily on the lusciousness. It is a moment I also anticipate, with camera in tow. 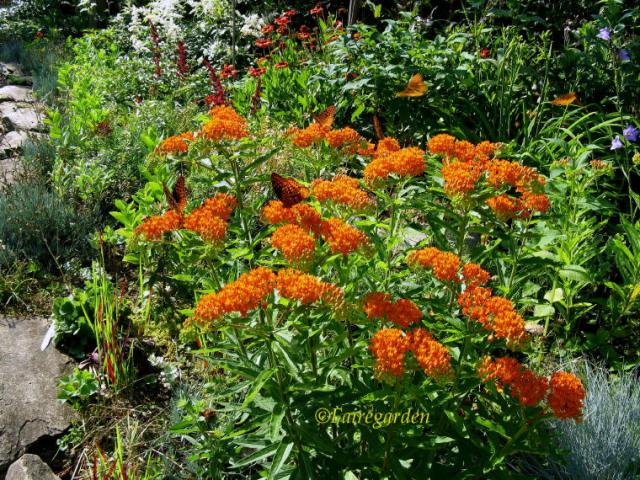 The numbers of butterflies are down this year and the past few, way down from the first year of blooming from those secretly snitched seeds in 2008, shown above and 2009, the photo before. I remember counting as many as sixteen butterflies all fluttering and feasting before losing track of who had been counted and who had not. It was a delirious spectacle. 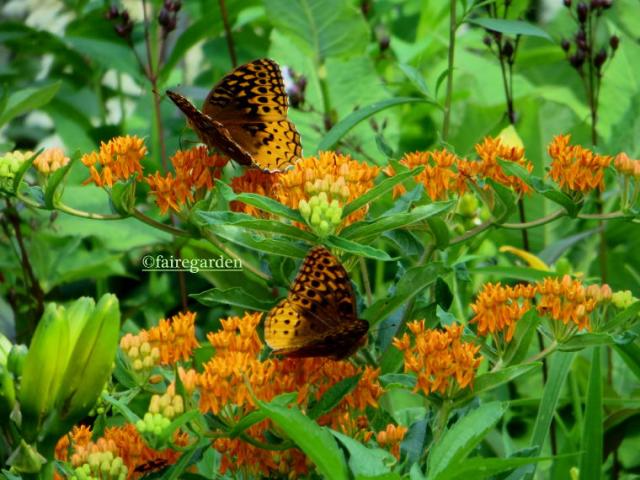 This year there were but two diners, but that is enough for an increase in population, if everything is as it should be for romantic interludes. Let us hope that love is in the air… 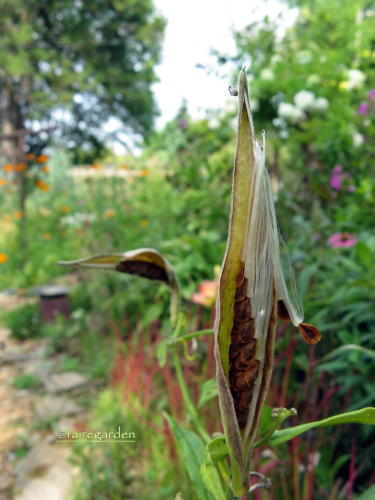 This is to be considered as a posting for my dear chum Gail of Clay and Limestone’s Wildflower Wednesday. The fourth Wednesday of each month is so designated, but really, anytime is a good time to think about wildflowers.

This entry was posted in Wildflowers, wildlife. Bookmark the permalink.