How To Make Iris Weavers For Basketmaking 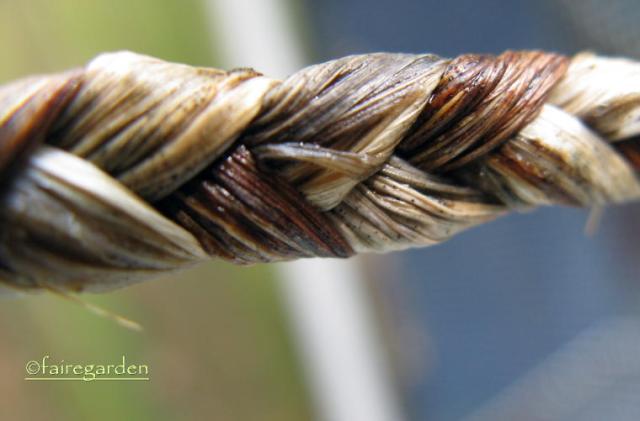 Above is a free form basket using the iris braid as weavers, along with other materials. The ring and stakes are grape vine, or the stakes might be honeysuckle, not sure. It was made a long time ago.

I became interested in baskets in the mid 1980s. We had moved to southern California from a small town in middle Pennsylvania. It was a culture shock to say the least. But there was lots to do and see there, including an arts festival in Laguna Beach, the Sawdust Festival. One of the stands featured baskets made from landscape materials, some made with pine needles. Our front yard was filled with Canary Island Pines that dropped needles nearly continuously. We could not afford the baskets, but did purchase a book about baskets made from nature’s bounty. I made a small pine needle basket, it was harder than I thought and didn’t turn out that great.

Three years later we moved to a town in upper east Tennessee. Some new friends there were taking a basket class and invited me to come along. I jumped at the chance and took many, many sessions of classes, long after the friends had had enough of it. I was obsessed. After mastering the basic techniques well enough to be able to make some simple baskets without instruction, we looked into the garden for materials.

This is one of the first baskets made from the garden. The ring and handle are bunches of Vinca minor stems (not a good choice, too brittle), the weavers are lavender sticks (also too brittle) and single iris leaves. It was noticed during garden clean up of the large iris bed that the mottled leaves were not only attractive but very strong. Unlike the daylily leaves that would tear easily, the iris leaves were composed of fibers that held even with a firm tug. Removing the dying iris leaves was also good gardening practice for slugs and snails like to hide in the decaying matter as well as the dreaded iris borer. Thinking of a way to put the leaves to good use, and being in the mode of trying anything and everything from which to make baskets, it was decided that braiding the leaves would make for stronger weavers. The free form basket in the second photo was the first basket made using that material. Even after more than twenty years, the basket is still strong and solid. (The above basket is filled with moon snail shells collected from the beach in South Carolina some time ago.)

Are you ready to learn more? Timing is everything. 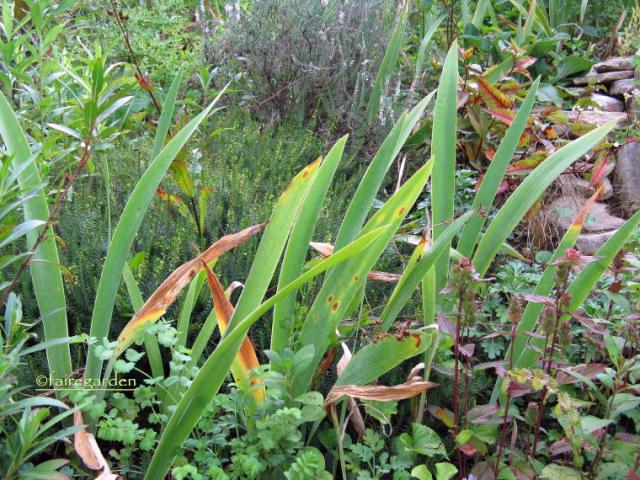 The time is right, now is when to look for iris leaves at the peak of perfection for making braids to be used now or later for basket weaving. The signs are the leaves beginning to turn tan as the chlorophyll says goodbye for another year.

This is just what we want, still intact and completely tan, no green. The leaf should dislodge from the rhizome with a gentle pull. Gather a couple of dozen more or less to begin.

Put the leaves in some water in a bucket. They don’t have to soak for long, but should be thoroughly wetted. They will stay in the bucket while you work. Ignore that green one, it was not used and should not have been picked. It is not ready.

Before you begin, find a comfy chair outdoors that can get wet. Wear old clothes or a sheet of plastic over your lap. Have another chair in front of you to hold the braid, seen in upcoming photos. Start by selecting two pieces. Fold one in half, add the other and begin braiding the three pieces, the one folded making two. 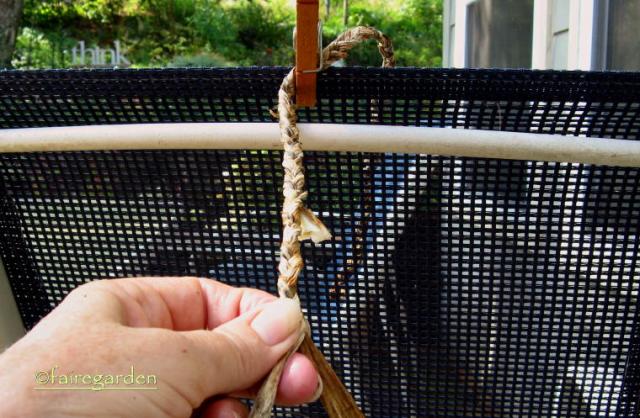 Getting the first couple of inches done is the hardest part. After that, fasten the braid with a clothespin or clamp to the extra chair in front of you that I told you to get before. Get comfortable, keep your back straight, legs apart for stability. You’ll thank me later. Have the bucket of leaves on a bench or something so that you don’t have to reach in an awkward position to get more leaves, for you will be doing that almost constantly. 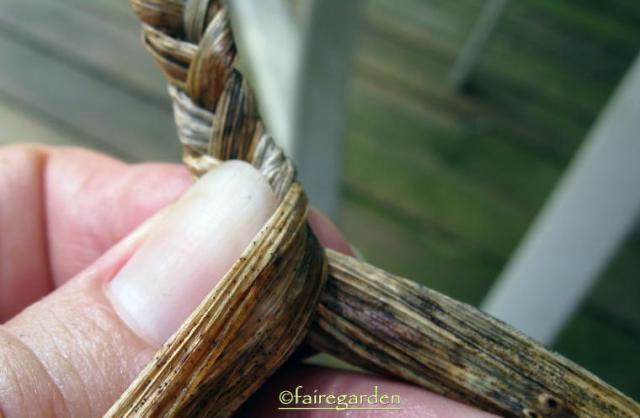 Braid with a foldover, not a twist as you go. This will give a neater look and also make the braid stronger.

Add another leaf to the shortest piece when it is about six to eight inches long. Don’t wait until you are down to the very end or it will be likely to pull apart during basket weaving. I usually add the pointed end of the leaf to the existing piece, then you will have a double thickness for the more narrow part of the leaf. Keep adding new leaves as needed to the shortening pieces as you braid, never letting the braid piece get too thin either, in case you have picked a less than perfect leaf. Having selected the largest iris leaves to harvest will pay off now as every leaf you pull from the bucket is of consistent size and strength, hopefully, but the weak ones sometimes sneak into the bundle. Continue braiding, moving the work up and over the chair top and refastening the clothespin to keep it at a comfortable position for you.

Occasionally the end piece of the leaf, the part that was attached to the rhizome will be larger than the braidings. We consider this to add character and simply braid around it, letting it stick out, braiding firmly but with not too much pulling to break or tear the leaves. You will get really efficient at this quickly. It is fun! 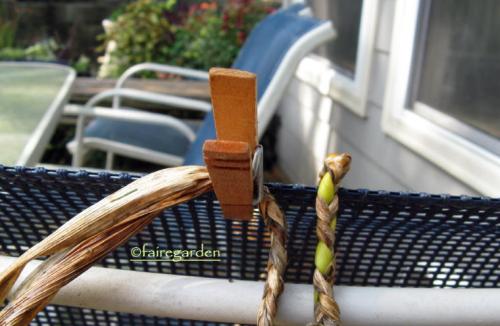 If you need to stop before all the leaves have been used, because your hands are hurting or there is something else that needs your attention, clip the braiding end with the clothespin. You can leave the leaves in the bucket of water, but not for hours or overnight. They will start to disintegrate and be unusable with too much soaking. It is best to pick only what you are going to use at one sitting and work straight through, with rest periods for sore, aging hands of course. This is the reason why the braiding sessions need to coincide with the perfect timing of the browning of the leaves. Green color gone, but still strong and intact is the best time to use the iris leaves. (Ignore the green part, it is not supposed to be there. Do as I say, not as I do.)

When you have used all the leaves, tie the end into a knot.

Here is the finished product, about six feet in length. That is about the right length to use of any material to weave a basket. Longer and it will begin to fray from being handled so much as it is woven in and out, no matter the method used. You want it as long as possible so there are fewer joinings, always a weak point in a basket and the idea is for it to be strong. You wouldn’t want it to fall apart after putting so much effort into it. This piece will be hung in the shed to dry until it is needed. 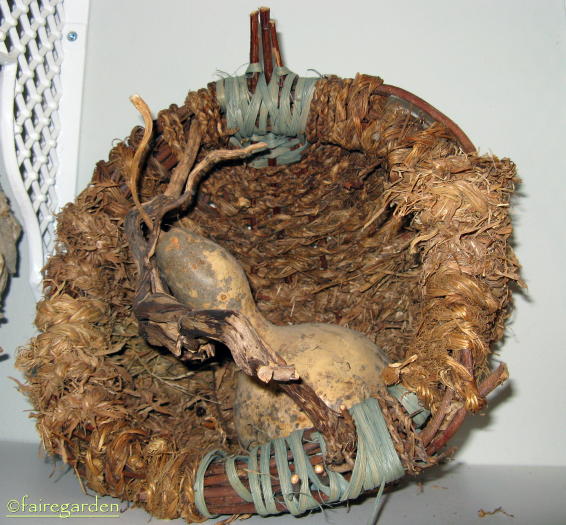 Here is another basket made many years ago using a lavender root and stem as the handle. The ring is several stems of grapevine, the stakes are , hmm, I don’t know. I think it might be purchased smoked round reed. The blue is purchased reed, what most baskets are made of, that has been dyed using Rit Dye. After the blue weaving is iris leaf braid then the remainder is woven with braid made from smartweed which was everywhere in our garden. It, the grass like plant, was difficult to braid, using handfuls of the blades and stems to have enough thickness to be strong. This basket is messy, always leaving debris wherever it is resting. The bird house gourd was grown when we lived in Texas, where we moved after nine years at the other Tennessee house. (We have been back in Tennessee, in another town for ten years after three years in Texas.) We still have quite a few of those gourds from that one year. The secret to success was that the seeds were planted at the base of the compost bin and watered by the inground irrigation system at that house.

Back to the topic, this how to post will not show how to make baskets. I suggest you take a course with some friends at a shop that sells the materials. Take the course several times and acquire the skill to be able to make a basket out of anything you can get your hands on. We did sell some of our baskets, gave many as gifts and still have several. Or you can use the iris braids in whatever way your brain leads. Wreaths, swags, please let me know if you have other ideas! 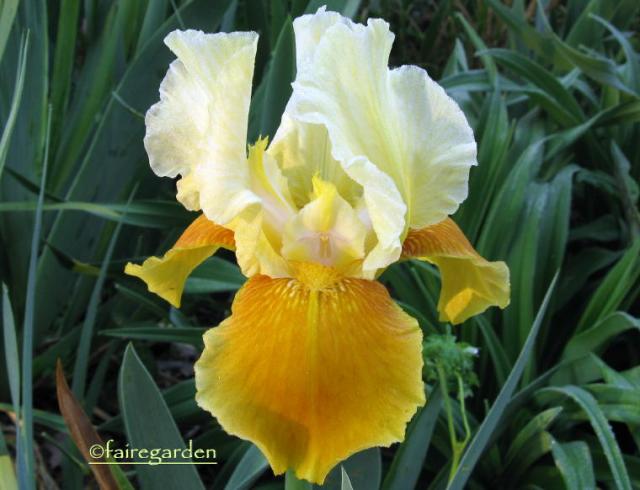 Isn’t it nice to make something useful from something so beautiful?
Iris germanica ‘Champagne Elegance’

There is one other type of leaf that has been braided to make a basket. In 2002 we found some seeds for Sorghum vulgare, broomcorn, while on a trip to Colonial Williamsburg, Virginia. The seeds were started in the greenhouse the following spring, planted out, and grew well. The stalks were harvested to make some brooms, the post about it can be seen by clicking here-Brooms. The leaves were stripped off the plants as part of the broom making process and seemed too wonderful to toss into the compost. They were soaked and braided per the instructions above, then made into a basket as a two part wedding gift for offspring Semi, with some money plant, Lunaria annua thrown in for good financial feng shui. The broom that was used at the end of the wedding ceremony, jumped over as they left the church hangs on the wall at their house. It often gets commented upon, as you can imagine.

This entry was posted in How To. Bookmark the permalink.

30 Responses to How To Make Iris Weavers For Basketmaking