How To Make Lavender Wands 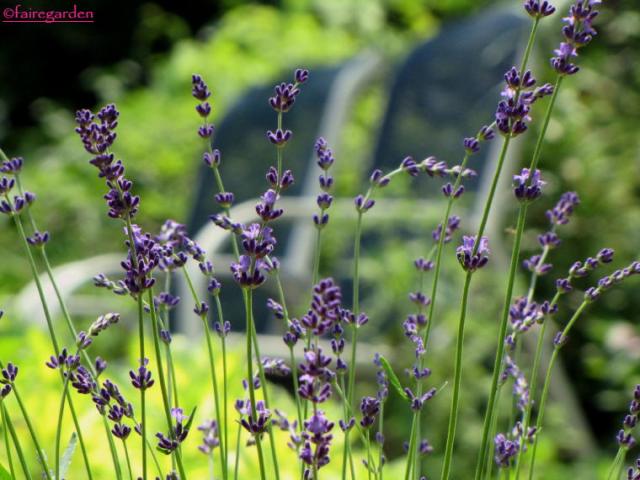 When we began gardening in earnest, when the youngest offspring went to school all day and we had more free time at home, it was the growing of herbs that snagged our attention. Easy to grow, beautiful in the landscape and useful, what more could be asked from any plant? Books about herbs and herb gardens were checked out at the library and some were purchased or received as gifts for birthdays and Mother’s Day. Every fact about how to grow and use them was devoured and digested. Lavender was the first planted and we were smitten.

Fast forward to now, several years and gardens later. Lavender is still grown in the Fairegarden, several varieties, some names we know, some are just Lavandula ssp like this variety that grows along the wall behind the main house that will be used in the project detailed below. The blooms are open at the optimum stage for making lavender wands, just beginning to flower.

What are lavender wands you might be asking? Kitty will help with the visual demonstration to explain. These are old wands made several years ago, 2003 or before, still in good shape and still quite fragrant. The idea is to encase the buds and flowers by bending the stems over them and securing either by weaving ribbon or other material or simply tying the stems together below the flower bulge. Today we will show the weaving of ribbon technique. The beginning steps are the same for both ways and an explanation of simply tying will be presented at the proper moment. (Yes, the basket is one I made long ago, if you were wondering.)

Begin by cutting the longest stems you can find on the plant that have a few flowers completely opened. This is nineteen pieces, you will need an odd number to use so the weaving comes out right. I have used as few as eleven and as many as twenty three. Fifteen is probably ideal. This is the best time, but whenever you can spare a few minutes to do this will work as well. There should be some flowers opened however. Really one begins by growing the lavender, but that goes without saying, doesn’t it? Onward. 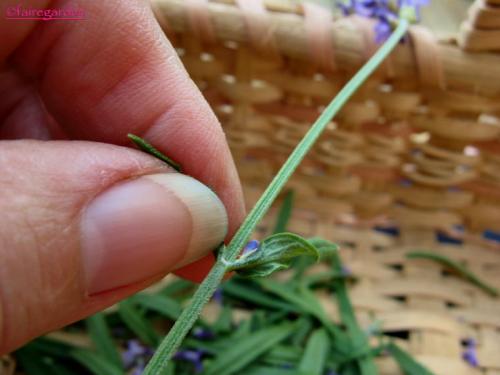 Once you have cut the stems, find a shady spot outdoors with a comfortable chair and a nice breeze. The wands need to be made as soon after the stem cutting as possible since they will become dry and brittle quickly and break rather than bend. There will be buds and leaves that fall to your lap, save them for a pleasant potpourri in a small dish inside. Have a spool of quarter inch or smaller, this might be three sixteenths, ribbon at the ready and scissors, but you already have scissors that were used to cut the stems, don’t you?

Clean the stems of any leaves or buds below the top portion by pinching them with the ever handy thumbnail. Don’t just pull them, you might weaken the stem. How do you grow such a nail, you might ask? Here is our formula: Milk, a twelve ounce glass each day, plus Flintstones children’s vitamins with calcium, two per day. . This post is getting a little teensy bit sarcastic, Frances, stop it!

After the stems are cleaned, gather them together so that the bottom portion of the flower heads are all at the same place. Tie them with the ribbon in a double knot, as close to the flowers as you can get and as tight as you can make the knot. Stick the tail of the knot into the flowers to hide it.

(Before you begin the next step, be aware that I am left handed and you may or may not want to use the hands the way they are shown in the photos). Holding the bunch firmly in one hand, begin folding the stems down over the flowers and ribbon knot two at a time whilst weaving the ribbon first over the two, then under the next two all the way around. (If you want to simply bend the stems to form a cage around the flowers and tie off with the ribbon, or a piece of twine can be used, feel free to do so. Trim the stem ends and you are finished.)

Keep the ribbon straight, do not let it twist and try to keep the stems evenly spaced as you go. This will become easier with practice, beginning is the hardest part. The last set will be three stems instead of two since you have an odd number. It is okay and will be worked out when the weaving goes to one stem at a time as you get to the fatter part of the wand. Do a couple or three rows of twos. Keep the stems over top of the flowers, they might want to get pushed inside and you will lose your pattern that way. Watch that the same stems are over one row, under the next. It should not be over and over or under and under.

After three rows are finished and you are back at the three stem ending, begin going over and under with every stem rather than with two. This will make a more secure cage to hold the flowers and buds as they shrink and dry over time and will give a neater look. It may be tricky to keep the stems straight and use each one on the first row. There will be a space that is two rows open with every other stem until you have gone all the way around. That is okay, it will work itself out after the next row of single stem weaving.

Continue weaving around and around, keeping the stems straight and as evenly spaced as possible. The handy dandy thumbnail is useful for pushing the stems into place and also pushing the ribbon up as close as possible to the row above. This becomes easier after you have made a few wands. I have easily made hundreds if not more of them over the years. At first we made them as gifts, then began selling them to an herb shop in the first Tennessee town where we lived. That was the beginning of the business named Faire Garden. But that is another story for another time. Onward. 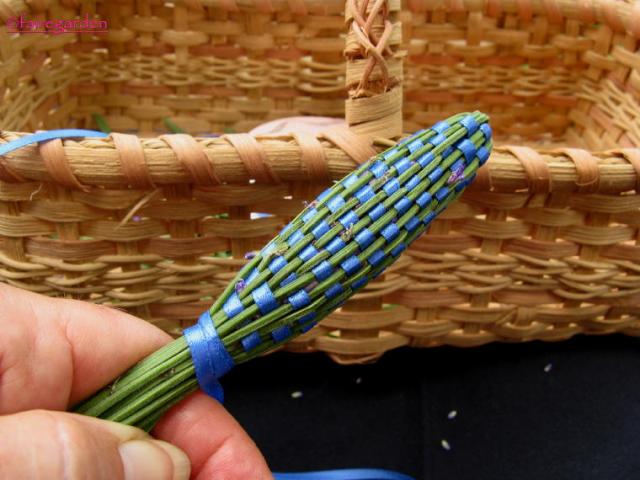 As the width of the wand begins to decrease you can start weaving two stems again like you did in the first rows. If you are only using eleven or thirteen stems, weave the whole thing using one stem for each over and under. When you have covered the flowers and are down to stems only, wrap the ribbon several times around as tightly as possible and tie off. 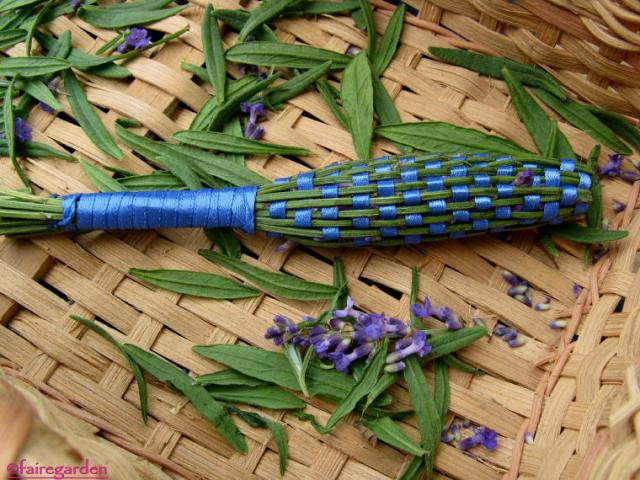 For this wand I wrapped the ribbon on down the stems a ways then cut it and tied off a second time, sticking the end into the stem wad below the ribbon. You can see on some of the older wands in the photo earlier that another piece of ribbon was added at the initial tie off and bows made. The point is to not have the ribbon unwind, however you want to finish it. Trim the ends of the stems neatly with the scissors. The wand is now ready for use in a lingerie drawer, stuck upright in a vase as part of a dried flower bouquet or just in a basket or dish. It will shrink a little as it dries but if you have woven tightly there should be no mess from it. To reinvigorate the scent, give the cage a light squeeze. I have some of these that are more than ten years old and the fragrance still comes to life with a gentle touch.

The favorite lavender grown here is L. angustifolia ‘Hidcote’ with the darkest blue flowers and shorter stature. It is in a stand by the arbor path and in the center quatrefoil of the knot garden. The buds are not quite open yet but will be soon. Wands could be made from them, although we already have plenty of those and aging arthritic hands cannot weave as comfortably or quickly as they could in the past. It does take a certain amount of manual dexterity to fashion these sweet tokens. We are not over the hill yet, but there is a little pain involved in this for me now, although I hate to admit to it.

Whether or not we put the herbs here to use beyond the garden landscape beautification, lavender will always be grown. Sometimes it dies and is not replaced. Full sun and excellent drainage are essential to living long and prospering for this genus. The Hidcote has proven quite hardy, with the knot garden specimens stuck into the ground there as cuttings taken from the original plants by the arbor in January 2007. That might be the key to propagation, do it in winter while the earth is cool and moist but not frozen. It is not the cold that kills it, although pruning living stems before the spring temperatures have warmed for the duration can kill the plant. The best time to prune is soon after flowering, although dead flower stalks may be cut off at any time. Humidity is an enemy, we could not grow it at all in Houston even with the alkaline sandy soil that it loves. We have acid heavy clay here, but the sunny slopes seem to make it feel welcome. As do the bees. This fellow, a Carpenter Bee, received the powdered sugary coating from some nearby Malvas before coming to the lavender, whose stem could hardly bear his weight. He is undeterred.

This entry was posted in cats, How To, Plant Portrait. Bookmark the permalink.

66 Responses to How To Make Lavender Wands